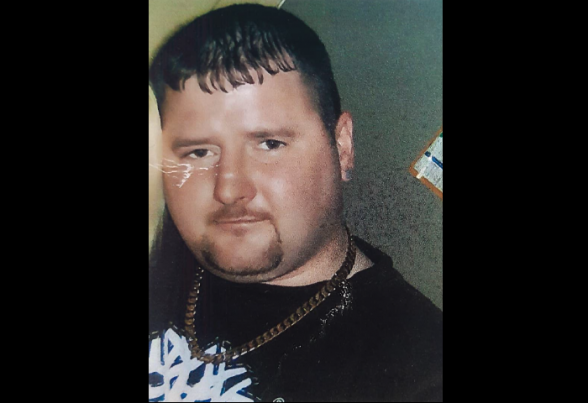 DETECTIVES from the PSNI’s Serious Crime Branch investigating the murder of Joe Reilly in Poleglass have returned to the scene on the one-week anniversary of the shooting.

The officer in charge of the case confirmed the drugs and paramilitary involvement are definite lines of enquiry.

Officers wearing similar clothing to the two killers retraced their getaway route in the hope that more people in the community will come forward with information.

“We are still in the early stages of this investigation. Some progress has been made but we need more assistance from the community.

“Thanks to the response to our appeal last week a number of witnesses have come forward.

“We now have a clearer picture of where the killers went after the murder.

“We believe they came out of the front door of Joe Reilly’s house at 1 Glenwood Court around 8pm and ran along Glenwood Drive into Laurelbank heading towards the Bell Steel Road.

“We need to know what happened next: did they get into a car or did they continue on foot along to the Bell Steel Road or cross the Pantridge Road into Colin Mill?

“We are also interested in confirming how they arrived at Joe Reilly’s house: did they walk there or were they dropped off from vehicle nearby?

“Information from the community has enabled us to identify the type of clothing the killers were wearing: both were wearing half-zip hooded sports tops and skin tight jogging bottoms. Both had their faces covered and at least one had a Celtic scarf up over his face and was wearing dark rimmed glasses.

“We need to know where these men came from before the shooting, where they went afterwards and we want to speak to anyone who recognises the clothing.

“We have issued a photo of similar type clothing and would ask people with information to contact us at Musgrave police station on 101.”

43 year old Mr Reilly was shot twice in the chest in the living room of his home while two other people in the house were forced to lie on the kitchen floor. Despite the efforts of paramedics, he died at the scene. His funeral took place yesterday.

DCI Montgomery said: “We are also issuing a photo of Joe Reilly which has been provided by his family. They are devastated by his death and have asked to be allowed to grieve in private.

“We are following a number of definite lines of enquiry as part of this investigation. We believe the murder may be linked to illegal drugs and that it may have been carried out as some form of paramilitary style shooting.

“It would be easy to adopt a judgmental position and decide not to get involved in helping police.

“But I would ask people to remember there is a handgun out there which may be used to inflict another death on someone else if it is not taken off the streets; there is also a family grieving for the loss of a son, a brother, a father, a grandfather and a partner.

“And there are killers at large who need to be made amenable for their actions through the courts.

“Police will play their part in working to deliver a robust and accountable criminal justice outcome to this cold-blooded crime. But we need the community and the ordinary decent people in the local Poleglass community to work with us, to provide us with information so that we can progress our investigation.

“As members of a civilised society, we owe it to ourselves, to each other and to victims like Joe Reilly and his family to put those responsible for his death before the courts.

“Those who have taken the law into their own hands to deliver what amounts to a summary execution need to be put behind bars so that our community is a safer place.”

Anyone with information about Joe Reilly’s murder is asked to contact detectives at Musgrave police station on the non-emergency number 101 or use the independent charity Crimestoppers anonymously on 0800 555 111.