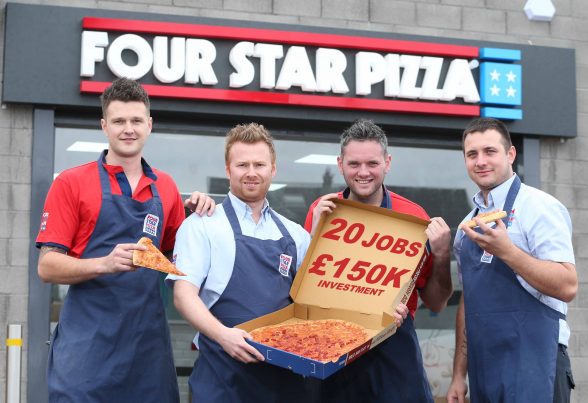 Darren Colgan (second left), owner of the new Bangor Four Star Pizza store, is joined by some of his team to celebrate the opening of the store which also has a sit-in area. The store officially opened its doors at Unit 3, 81 Gransha Road (BP station complex), on October 11, as part of a £150,000 investment which will create 20 jobs in the area.

SEASIDE pizza lovers in Bangor are celebrating the news that Four Star Pizza has opened its first store there.

And owner Darren Colgan, who began his career with the pizza chain as a delivery driver but now runs three Four Star Pizza stores, is giving away 1000 free pizzas, to celebrate the opening of his new Co Down store.

In the past 12 years, Darren and his team have delivered no fewer than 374,000 fresh pizzas, used 32 tonnes of flour, 16 tonnes of cheese and 5 tonnes of pepperoni.

Over the next three weeks, the Four Star Pizza Bangor ‘street crew’ will be visiting local businesses, housing estates and Bangor town centre giving away empty 7” pizza boxes which the public can take to the Gransha Road, Four Star Pizza store to get filled with a free pizza.

“We want to let the people of Bangor, and the surrounding areas, know that we have arrived and what better way to do this than by giving 1000 free pizzas away.

“As well as this, we have some great prizes up for grabs on our Facebook page so if you don’t bag a free pizza on the street you may be luckier online?

“But when they’re gone, they’re gone so make sure you visit our Facebook page or meet the ‘street crew’ for a slice of the action,” said Darren.

Darren’s career with Four Star Pizza began when he was offered a delivery driver job, so he would encourage anyone looking for a career change or challenge to apply for one of the 20 positions available at the store.

He added:  “I had no idea when I started delivering pizzas for Four Star Pizza that it would change my life. 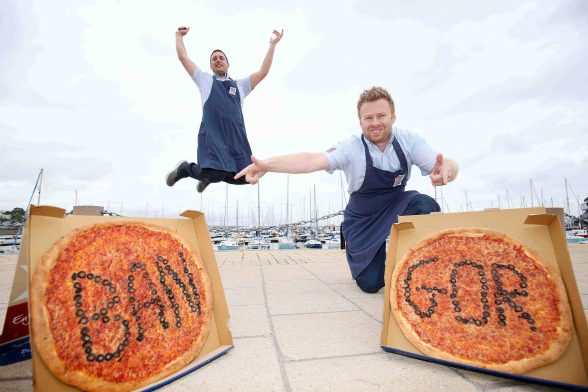 Darren Colgan (front), owner of the newly opened Bangor Four Star Pizza store, was at Bangor Marina with team member, Bela Deak Vesci, to celebrate the opening of his store which also has a sit-in area.

“I run three stores now and employ over 50 people – not only that but we support the local economy by using, as much as we can, local food suppliers.

“Not a lot of people realise that we actually make our pizza bases in store, fresh every single day using Neill’s flour.

“I would encourage people to apply for the remaining positions and see where a career with Four Star Pizza can take you.”

Darren even met his wife whilst working at Four Star Pizza.

“My wife and business partner, Laura, started working at Four Star Pizza 5 years ago – in fact I was the one who employed her.   So when I say to people that pizza changed my life, I really mean it”, he commented.

Darren is an award-winning store owner, winning ‘Most Improved Store in Ireland’ at Four Star Pizza’s awards in 2011 and again in 2015.

“It’s satisfying knowing that across the whole of Four Star Pizza’s network in Ireland, the stores I took over the running of performed the best.  I put this down to my passion for succeeding and from having a great team of people behind me.”

To bag an empty 7” Four Star Pizza Box, keep an eye out for the Bangor ‘street crew’ who will be at different locations over the next three weeks – for clues on where they are, visit their Facebook page.

Four Star Pizza is an Irish-owned Pizza chain, first established in 1988, which operates 40 stores across the island of Ireland,specialising in creating fresh, delicious pizza and delivering it straight to your door.