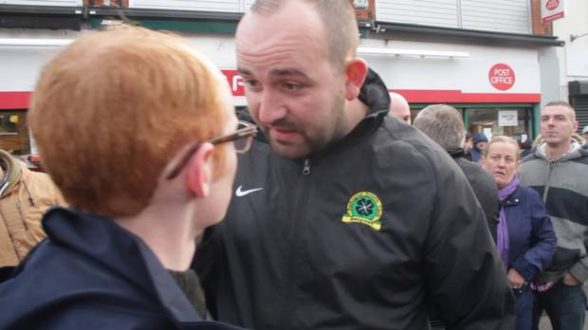 A GARC bully boy has been arrested by police investigating a report of threatening behaviour against a reporter at Ardoyne on Saturday.

Thug Gerard McCusker, a brother of SDLP councillor Paul McCusker, was detained in the Belfast area on Tuesday afternoon.

“He was interviewed and has been released pending a report to the Public Prosecution Service.

“Enquiries into the matter are currently ongoing,” Chief Supt Noble.

The reporter had recently exposed McCusker’s mother selling cigarettes from her house which undermined local shops..

“I am fucking coming after you. You better watch yourself. See after having a week drink you will have a bad fall one night.”

Sunday Life handed over the video footage to police for investigation.

Now McCusker has been left sweating on a decision by the PPS on whether to take the matter further and summons him to court for making threats to kill and commons assault.