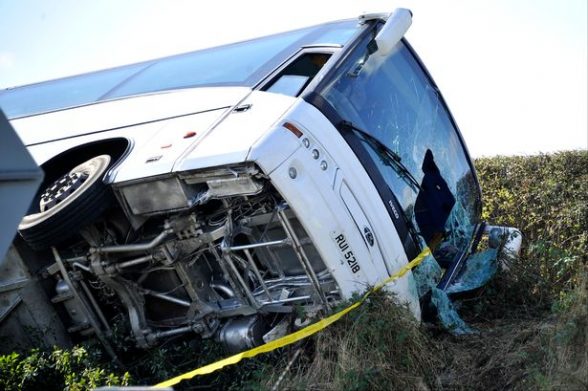 TRIBUTES have been paid Larne man Ryan Baird who died after a coach carrying Rangers fans overturned in East Ayrshire on Saturday.

The 39-year-old Rangers fan was originally from Northern Ireland.

His cousin, Louise Evanne Baird, said he was “amazing” and would be “sadly missed”.

Police Scotland said a further 18 people were taken to hospital, and three were seriously hurt.

The crash happened at about 1.15 pm on Saturday on the A76 by the Crossroads Roundabout near Kilmarnock.

The coach was taking the Nith Valley Loyal Rangers Supporters’ Club to Ibrox Stadium, where Rangers were due to play Partick Thistle in the Scottish Premiership.

Mr Baird’s partner Sarah Hughes, paid tribute to him, saying he had loved the club.

The Nith Valley Loyal Rangers Supporters Club posted on its Facebook page: “The club would like to thank everyone for their good wishes & concern at this sad time.”

RangersLinfieldFC tweeted: “We have been informed that the man who sadly passed away was a Rangers and Linfield fan named Ryan Baird from Larne, Northern Ireland, RIP.”

In a club statement, Rangers said it was “deeply saddened” by the crash, adding: “Our profound condolences go to the gentleman who has died and our thoughts are with his family.

“We are also thinking of those who have been injured and taken to hospital.”

Rangers managing director Stewart Robertson said: “Everyone at the football club and every member of our Rangers family is thinking of all of those caught up in this terrible accident.

“Clearly this is a deeply distressing time and the board extend our deepest sympathies and concerns.”

Rangers assistant manager David Weir said he was sure the club “will be very supportive in regards to anything they can do to help the situation”.

Celtic also passed on their condolences in a club statement, saying: “In relation to news of today’s accident involving Rangers supporters on their way to the match, everyone at Celtic sends our sincere condolences following the death of a supporter.”

One passenger said the bus, which had 37 people on board including the driver, had “swerved” before landing on its side on a grass verge.

Police Scotland said: “We can confirm a 39-year-old man has died following a serious coach crash on the A76 near Crossroads Roundabout.

“A report will be prepared for the Procurator Fiscal.

“Eighteen people are receiving treatment in hospital, three of whom are in a serious condition.

“This includes seven men under 20 years of age. Three men and three women aged between 30 and 59 and five men over 60.”