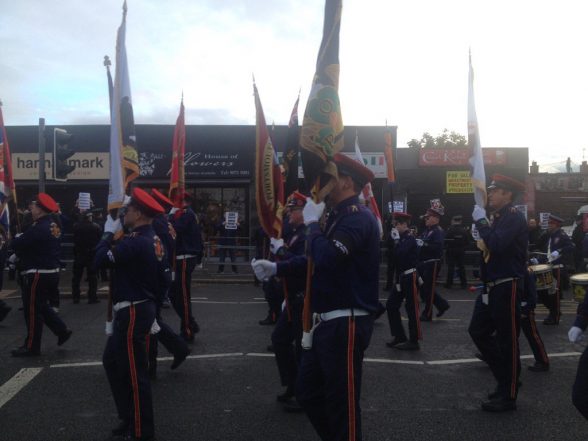 THE controversial Orange Order parade through a flashpoint area of north Belfast years has ended peacefully.

Loyalists are also dismantling their protest camp at Twaddell Avenue as the dispute has now ended.

It was set up in July 2013 after the Parades Commission ruled Orangemen could not walk along the route.

A massive security operation was in place today with 600 police officers were involved.

The Orange Order were allowed to march along the route after a deal was hatched between Orangemen and nationalist residents’ association, the Crumlin Ardoyne Residents Association (Cara).

Several dozen protesters from the Greater Ardoyne Residents Collective (Garc), who reject the deal, gathered at the Ardoyne shops as the parade got underway.

They chanted “walk of shame” but dispersed peacefully after the march passed.

One GARC mouthpiece, Dee Fennell, got into a heated argument with local Ardoyne priest Fr Gary Donaghy for agreeing to the deal.

A GARC protest against the parade passed off peacefully on Friday evening.

A small crowd took part, beefed up by women and children, showing GARC has very little support in Ardoyne.