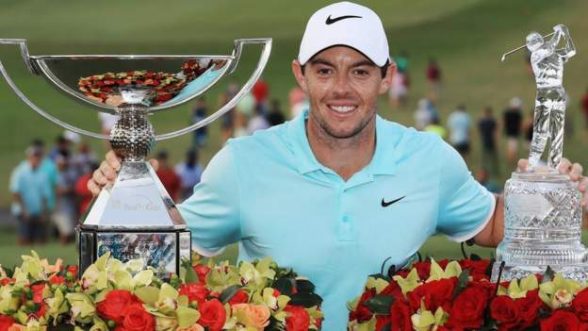 RORY McIlroy snatched the FedExCup title and the $10 million bonus jackpot from Dustin Johnson with a dramatic play-off victory at the Tour Championship.

The Holywood star holed out for an eagle two at the 16th and birdied the last on his way to a final-round 64 at East Lake, joining Ryder Cup hopefuls Kevin Chappell and Ryan Moore on 12 under.

McIlroy, beginning the week sixth in the FedExCup standings, saw his eagle try at the first extra hole lip-out, joining Moore in making birdie as Chappell was eliminated with a par.

The world No 3 and Moore both completed the next two in regulation, before McIlroy holed a 15-footer at the fourth extra hole for the birdie needed to claim a second PGA Tour title of the season and leapfrog Johnson at the top of the FedExCup standings.

Beginning the day tied for the lead, Chappell claimed the outright advantage with an opening-hole gain and drained a 30-footer at the third to join Johnson in posting a birdie-three.

Johnson lost ground after missing successive par-saves from eight feet at the fifth, as Chappell added a gain at the eighth to reach the back nine one ahead.

A hat-trick of gains around the turn briefly moved Moore to top spot, while Mcllroy stayed in contention by beginning his back nine with back-to-back birdies.

Chappell reclaimed top spot by holing from 20 feet at the 13th, as Johnson carded a three-putt double-bogey from five feet to all-but end his hopes.

McIlroy stayed in touch with the chasing pack by holing his 137-yard approach to the 16th for an eagle-two, the hole where Chappell picked up a sixth birdie of the day.

A lipped-out par-save at the next dropped Chappell back to 12 under alongside Moore, who sank a 15-footer at the 17th to close a bogey-free 64, before McIlroy made it a three-way tie by picking up a shot at the last.

After Chappell was eliminated at the first extra hole, McIlroy and Moore parred the next two holes before the Northern Irishman prevailed with an impressive approach and 15 foot birdie at the fourth extra hole.

Paul Casey fired a final-round 64 to end the week in fourth spot, with Hideki Matsuyama a further three strokes back after double-bogeying the last.

A three-over 73 left Johnson tied-sixth with Justin Thomas on five under, one shot ahead of Jason Dufner and former world No 1 Adam Scott.

This week he joins up with Ryder Cup captain Darren Clarke as the European team take on the USA.

The Ryder Cup starts on Friday, September 30 and climaxes on Sunday, October 2.