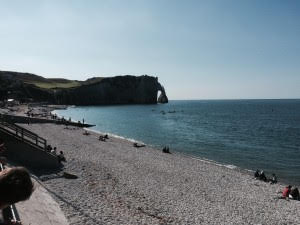 The Charente-Maritime offers the visitor a lovely choice of coastal destinations such as Royan or the Ile de Ré, city breaks to Saintes or La Rochelle and beautiful countryside such as the Marais Poitevin or Cognac Country.

Charente-Maritime has more wellness centres (six) than any other French ‘department’ and a number of UNESCO World Heritage sites.  It is a gastronomic destination of note – oysters, mussels, sea salt, pineau des Charentes, and is easily accessible by road, rail or air from the UK.

It boasts a Mediterranean climate of around 300 sunshine days a year as well as a whole host of events taking place throughout the year. For more information visit www.france-atlantic.com.

Here in Ireland we have many amazing chefs and local producers and as all the ‘greats’ will tell you the best way to produce fantastic dishes is the equality of the ingredients you make them with.

And its to this area of France I go, to list some amazing food. It’s not just a great place to get good food but it’s a fantastic place to stay too.

Famed for the oysters grown off the shores of this area on France’s Atlantic Coastline, there’s also salt, sea urchins and potatoes from the Ile de Ré, saffron from the Marais-Poitevin and the “hens with the golden eggs” from Marans, among many other gourmet delights.

The excellence of the products from this region has lead to a number of official certifications:

My good friends at the Charente-Maritime tourist board have picked some highlights for you:

Treasures from the Atlantic – The varied oysters of the Charente-Maritime each have a unique flavour no matter the variety – ‘affinée en claire’ or ‘pleine mer’.

This is due in no small part due to the diversity of the cultivators who devotedly nurture these shellfish to maturity, intent on retaining the very best flavours.

Their taste is very delicate and perfumed due to the exceptional cultivation in a unique ecosystem only found on Oléron Island and in the Marennes basin, where the fresh waters of the Seudre River meets the sea.

This dedication shown by the farmers of Marennes Oléron has led to them being awarded the ‘Label Rouge’ (Red Label) for the ‘fine claire verte’ variety.  Bestowed in 1989, these oysters are the only ones in France to have been given this honour.

For those who want to learn more about oyster cultivation, then head for the unmissable Oyster City. In parts fun and educational, visitors will find out everything they’ve ever wanted to know about the oyster, how to open them, how to prepare them and finally, how to eat them.

I am maybe not wrong when I say many people in Ireland do not eat Urchins, but I can assure you they are a delicious seafood and widely underrated.

The production of sea urchins has taken place in La Flotte on the Ile de Ré since 2006.

These creatures Sea are used as a bio-indicator of the presence of clean, clear water as without it, they would not survive.   Fortunately, the water quality on the island is exceptional and its so good for the urchins that only eat a certain type of seaweed which is found here all year round.

The methods used to raise them were started by Pierre Le Gall in 1980. The exceptional well-being of the animals means that a top quality product is available all year round.

The Hens with the Golden Eggs –

The Maran Egg is also known as the ‘extra red egg’ because of the deep red-brown colour of the shell.  The egg is typically large (70 grams as a minimum) from a regional hen, also prized for its tasty meat at the entrance to the Marais Poitevin. Locally known as the ‘hens with the golden eggs’, they lay between 230 – 240 a year.

Not only are the eggs attractive, they are also delicious and especially good when boiled rather than used in an omelette.  The Marans hens are the result of crossing a black hen of the Vendée with hens from the UK brought over by English sailors towards the end of the Middle Ages.

There was a second cross in the nineteenth century when a Chinese hen, a particularly effective layer called a Langshan, was imported in 1876. This new variety of bird was introduced to the world in 1914 at a national exhibition held in La Rochelle and was called the ‘country hen’.

If there is one dish that some people find difficult to eat it’s the snail. In Charente Maritime they have a special word for snails Les Cagouilles or Petits Gris.  They are bred between April and September and used in various ways.  Snail caviar, which originated from this area, looks like little balls of white pearls and now graces the tables of France’s elite restaurants.

Jean–Philippe Rousseau and his two associates from Mons is renowned as one of the top producers.  Charente – Maritime is the premier department in France for snail breeding – also known as heliculture – and there is even a brotherhood of snail producers.  400 tons are produced each year.  In France as a whole, 45,000 tons of snails are eaten every year.

Spicy Saffron – If salt is king in Charente-Maritime, saffron is not far behind it with the production of this spicy plant having taken place for during the last twenty years.

Saffron is grown between Marennes and Surgères it’s manually harvested in October and November.   Saffron sets the taste-buds going – especially in Indian, Spanish or North African dishes – but it is also good in a butter sauce on mussels, with prawns, pasta or otherwise in crème brulée or butter biscuits.

The King of Salt

It was the monks that first worked the salt beds of the Ile de Ré and Oléron.  From the Middle ages to the nineteenth century, salt provided prosperity for the area.  The Ile de Ré was the powerhouse of production having more than a thousand salt workers and 25,000 tons of salt harvested annually. 20% of the island was taken up with this activity.

Today, the industry is enjoying a revival with around a hundred young workers proud to be in an environmentally friendly and long-standing business.  The sea salt is collected between June and September and the fleur de sel (that pure top layer) is prized in French kitchens for its unique flavour.

Either fine or in rock form, salt from the islands are often flavoured with thyme, basil or fennel.  With varying meteorological conditions these days (you can’t harvest when it rains), production is between 1000 and 2,500 tons a year.

Samphire is very fashionable at the moment, a popularity that has spread far beyond the borders of the Charente-Maritime where is grows on the salty marshes.

It is also found along the side of the oyster beds and grows for four months in summer in salty, dry conditions.

It is a plant rich in minerals and thus very good for the health. It can be eaten raw – particularly good in salads, pickled like gherkins or cooked and served with meat or fish.