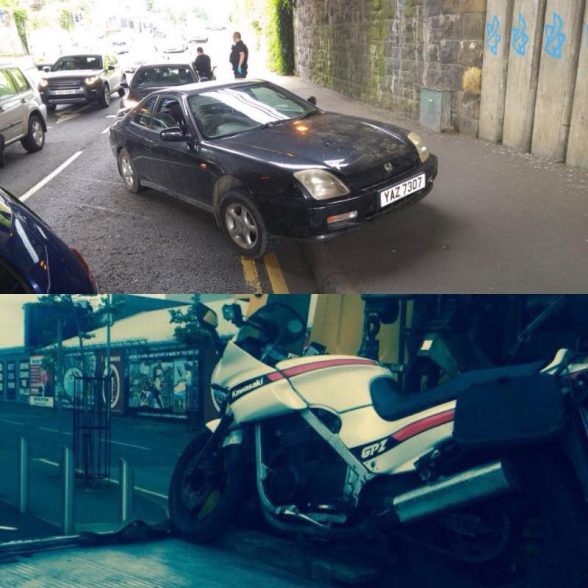 A notorious car criminal has been taken off the roads for a court appearance.

The PSNI say that last Wednesday, September 7,  members of the Auto Crime Team observed a black Honda Accord being driven by a male.

“He was well known to them as being a notorious car criminal.

“They turned their police vehicle and used their training to block this male in heavy traffic and stop him being able to flee as he has done on numerous occasions in the past.

“The male was arrested at the roadside and he will attend court in the near future charged with a number of motoring offences.”

The PSNI say Auto Crime Team also seized a number of vehicles which were on the road without insurance.

“If you don’t have insurance you are a danger to other road users and frankly yourself,” said a police spokesperson.

“There are many reasons why people don’t have insurance – none of which are acceptable– we can and WILL seize your vehicle and unless you bring insurance for us to see and we will crush your car as a deterrent if you fail to produce your insurance.

“Road safety is such an important issue to us – don’t drive without the correct documents, it’s not worth the risk of the Auto Crime Team or the Grosvenor Road Team catching you.

“The likely outcome is your car will be crushed and your name will end up in the paper and to finish it off you’ll have a criminal record.

“On Sunday 11th September the newest member of the Grosvenor Road team recovered a stolen motorbike from the Northumberland Street area, (he’s keen to fit in with the rest of us – and was handpicked for his professional driving skills).

“The motorbike was showing clear signs of been “hotwired”, it has been brought back to the station so its owner can get it back.

“Luckily with only a small amount of work the driver will have the bike back on the road.

“If anyone noticed anyone acting suspiciously around the bike pictured, please give us a phone at Grosvenor Road on the 101 number.”