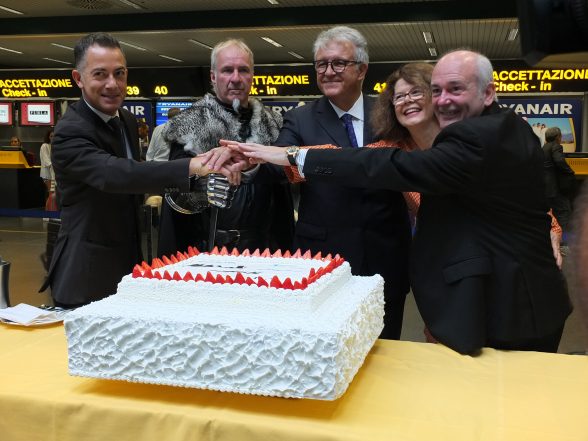 RYANAIR launched its new flight between Milan and Belfast earlier this month. It’s good news and will certainlyhelp boost tourism to Northern Ireland from Italy.

A launch event took place at the airport and was attended by influential Italian journalists.

A special Game of Thronescharacter, from Winterfell Tours, was in attendance, in full costume – reminding the journalists, as well as people travelling through the airport, about Northern Ireland’s close connection to the hit TV series.

Niamh Kinsella, Tourism Ireland’s Manager Italy, said: “We are delighted to co-operate with Ryanair and Milan Bergamo Airport, to highlight the new flight to Belfast and to grow tourism numbers to Northern Ireland from Italy.

“As an island, the importance of convenient, direct, non-stop flights cannot be overstated – they are absolutely critical to achieving growth in inbound tourism.

“Tourism Ireland is committed to working with Ryanair, Belfast International Airport, as well as other tourism interests in Italy and Northern Ireland, to promote and help maintain vital routes and services to Northern Ireland.”

Upcoming promotional activity to highlight the new Ryanair flight from Milan Bergamo will include a familiarisation visit for five key journalists, as well as co-operative advertising promoting short breaks to Belfast.