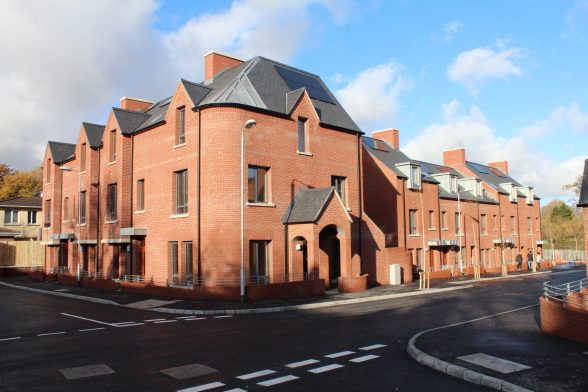 The competition, which took place in Lancaster Hotel London, is the UK’s housing largest event and recognises exceptional and innovative projects that address housing and related social issues.

Completed in two phases, the Limestone Road scheme has revitalised a once-abandoned residential area and increased community confidence to the point that a security barrier on Newington Street was removed after almost three decades.

The success of the scheme has also encouraged and enabled redevelopment work to start in the nearby Long Streets area of the New Lodge.

“This is an award that belongs to the communities of North Belfast as much as us.

“The project has shown how collaborative working between a housing association and the people we serve can bring significant longterm benefits.

A concerted effort on both sides of the interface and support from our statutory partners has injected new energy that is reinvigorating Limestone Road and nearby neighbourhoods.

“The planning, development and completion stages have enabled wider cross-community discussions about how this area can improve and secured new opportunities for sustained prosperity.”

In awarding Newington Housing Association, the judges described the Limestone Road Development as:

“A very successful scheme with a high quality design and good environmental credentials that has revitalised an existing abandoned estate.

“The layout and plans are simple yet inventive, it sits well in the community and is a great asset to the area.”

Ciaran Shannon, Project Manager at Duncairn Community Partnership, which is supported by the International Fund for Ireland said:

“While the homes in themselves are a major success, the development has encouraged communities to look at wider transformation opportunities.

“The resulting confidence and trust has helped remove a security barrier on the adjacent Newington Street that had stood for almost 30 years. It is one of the most significant peace wall removals in the city.”

Regarded as a ‘flashpoint’ during The Troubles, high levels of civil unrest and community division have, historically, complicated efforts to put existing housing and land to their best use to meet acute housing need in the area.

Last year the collaboration between Newington Housing Association and DCP was recognised at the CIH Awards where it collected the ‘Working Together’ Award the Limestone Road development also claimed a hat trick of awards at the RICS Northern Ireland Awards 2015.