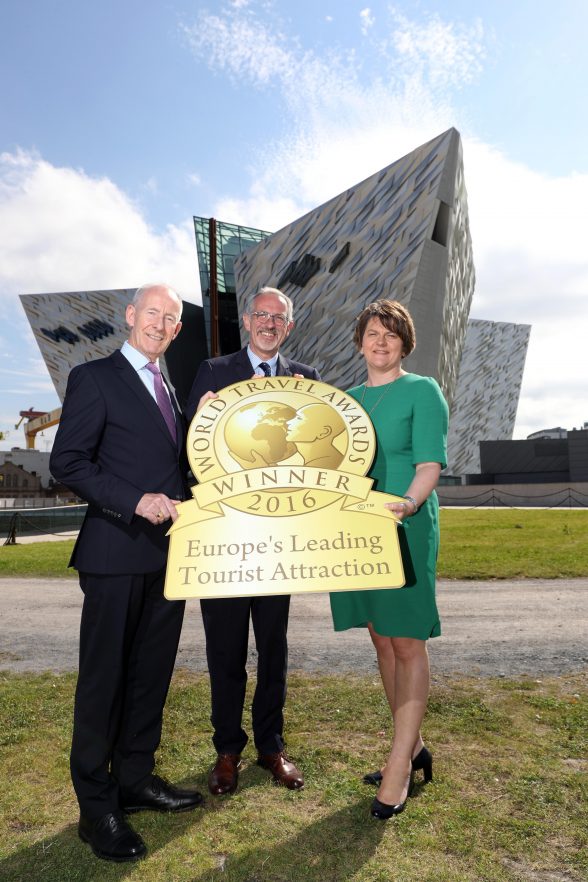 TITANIC Belfast has been named as Europe’s Leading Visitor Attraction at the prestigious World Travel Awards held in Sardinia, Italy.

It is the first time an attraction in Northern Ireland has won the award at the ceremony, which has been nicknamed the ‘Tourism Oscars’, in its 23 year history.

“After only four years in operation, to be recognised and beat off stiff competition from Europe’s most iconic landmarks is a true honour.

“We know what we offer at Titanic Belfast is something our city and country can be proud of and are so please that this is has been recognised on an international level.

“We are looking forward to welcoming the national and international visitors that this award will attract to Belfast and Northern Ireland.

“We would like to thank everyone who has supported and voted for us.”

“Titanic Belfast is now a global brand which has put Northern Ireland on the map for all the right reasons so last night’s official confirmation that it is now Europe’s leading tourist attraction is well deserved.

“I had the privilege as Tourism Minister of being involved with the project since its inception, and this award is further proof that the investment and imagination that went into this attraction keeps paying dividends for the whole of Northern Ireland.”

“The story of the Titanic is known around the globe and it is only right and proper we have a world class visitor attraction to match.

“When we opened this building in 2012 we hoped it would enable the current and future generations to explore the story of The Titanic in an innovative and interactive manner.

“Titanic Belfast has been a resounding success and I thank everyone involved in making this local tourism attraction a global ‘must see.”

Since opening in 2012, Titanic Belfast has established itself as a world-class attraction on thelocal, national and international stage, and continues to go from strength to strength.

This milestone came during a record-breaking August, as the visitor attraction experienced its busiest day to date.

The award adds to Titanic Belfast accolades as it was recently included in Lonely Planet’s Ultimate Travelist of 500 of the world’s most striking locations, featuring everything from imposing temples to hidden gems, after only a few years in operation.