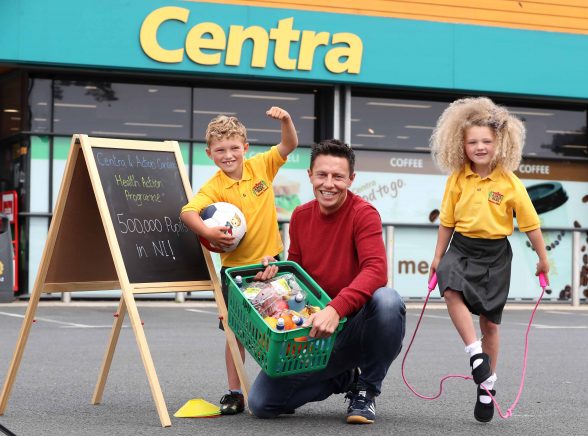 The children’s health education programme, sponsored by leading retail group Centra, has visited an impressive 500,000 children throughout Northern Ireland since 2003 and with Stephen’s help, aims to reach even more.

Figures released by the charity reveal that cancer prevention sessions, featuring information about being fit and active, eating well, being safe in the sun and avoiding the dangers of smoking and alcohol, have been brought to more than 1,000 nurseries, schools and colleges.

Action Cancer and Centra formed a partnership 13 years ago in support of the award-winning Health Action project, which is the only one of its kind in the province.

The number of young people taking part in Health Action roadshows is at an all-time high, and is fuelled by more than £1 million of funding raised by Centra stores and Musgrave Northern Ireland.

Stephen Clements commented: “I’m proud to be an Ambassador for Action Cancer’s Health Action programme and I hope with my involvement and support, we can reach even more children in Northern Ireland.”

Health Promotion Manager of Action Cancer, Frances Dowds said: “We are delighted that Stephen Clements has chosen to be the Ambassador for our Health Action programme.

“As both a media personality and a dad, we look forward to working with him to help us engage even more children across Northern Ireland from the new school term onwards.”