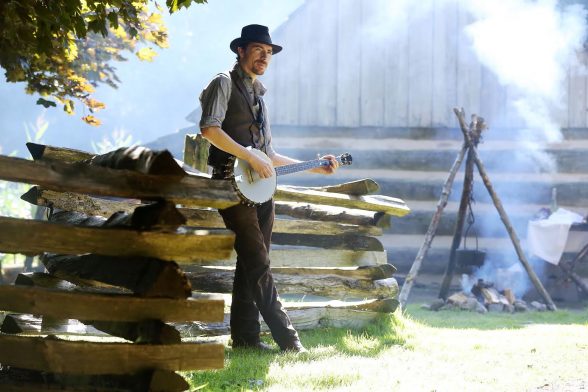 THIS year’s Bluegrass Festival at the Ulster American Folk Park is getting in tune for a truly international weekend-long festival.

Now in its 25th year and taking place from Friday 2nd – Sunday 4th September, the Bluegrass Festival will be bringing award-winning American, Canadian and European bands to Omagh as well as acclaimed acts from across Ireland.

This year’s headline act is Band of Ruhks from the USA. The band is made of some of America’s most admired Bluegrass musicians including Ronnie Bowman, Don Rigsby and Kenny Smith. Don & Kenny make a welcomed return to the Festival whilst Ronnie Bowman has long been regarded as one of Bluegrass music’s finest singers and songwriters.

Other North American acts include Scarlet Wool, from the state of Georgia, as well as Corn Potato String Band, fiddle and banjo duo Betse & Clarke and Canadian band Searson.

Three of Europe’s top Bluegrass acts return to perform over the weekend: Red Wine from Italy, Bluegrass Boogiemen from Netherlands and Sunny Side from the Czech Republic, whilst young and energetic Dr Bluegrass & The Illbilly 8 travel from England.

Talent from throughout the North and South of Ireland performing include, among others, Two Time Polka, Broken String Band and Erdini. Local singers of all ages will also be involved with the Bluegrass Festival Choir, which will be performing on Sunday 4th September.

Emmett will be demonstrating the use of traditional methods of food preparation and presentation and taking visitors on a food heritage journey on Saturday and Sunday afternoons at 1.30pm and 3.30pm each day.

A food village will also be available through the weekend with BBQ and bar.

Richard Hurst, Visitor Services Manager of the Ulster American Folk Park, said he was pleased how the festival has developed over 25th years.

“This year we are not only celebrating 40 years of the Ulster American Folk Park, we’re also marking 25 years of the Bluegrass Music Festival.

“What started out as a relatively modest event has grown to become one of the largest Bluegrass events outside of North America.

“Each year, we’ve focussed on bringing top quality Bluegrass bands to Omagh and this year is no different. Visitors can look forward to real crowd pleasers and amazing performances from this multi award-winning line-up.

Mr Hurst added; “It has been wonderful to welcome visitors from across the UK and Ireland year after year, and from as far away as Alaska and Australia.

“We’ve also been pleased to see an increasing number of younger people coming to the Festival. The Ulster American Folk Park is the perfect setting for the Festival – performing arts are a superb vehicle of telling the wider story of emigration.”

This year’s Bluegrass Music Festival has been supported by funding from Tourism NI and Northern Ireland Year of Food & Drink, as well as Fermanagh and Omagh District Council.

The ‘Party in the Park’ will kick off on Friday 2nd September, with performers from 2.00pm ‘til late. Saturday’s programming will also begin at12.30pm and continue through until midnight. Sunday’s programme will run from 12.30pm to 6.30pm.

For further information and to book online visit www.nmni.com/uafp