BINMEN GET A HUGE LIFT AFTER A WHEELIE BIG LOTTERY WIN 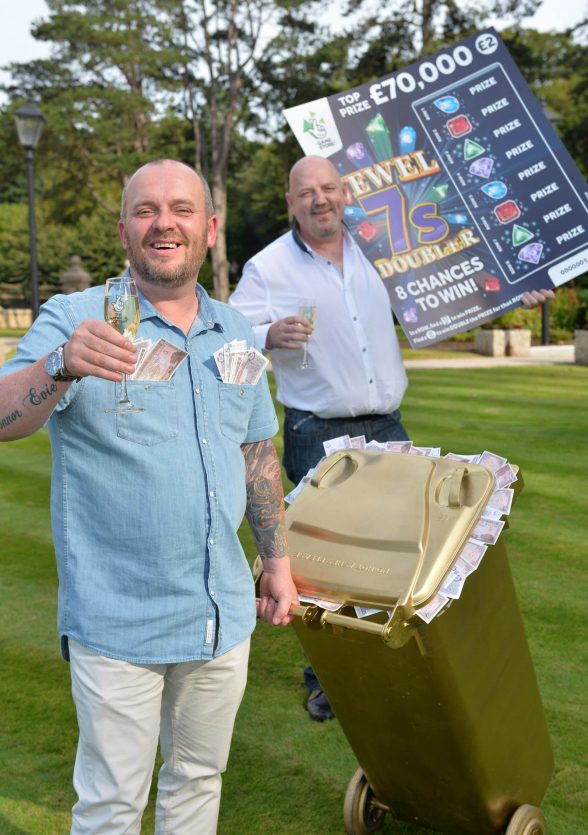 NEVER BIN BETTER: Co Down bin men Frank McCormick (44) from Newtownards and Stephen Inglis (46) from Bangor celebrate their wheelie good fortune after collecting a tasty £70,000 from a National Lottery Scratchcard.

TWO County Down bin men are considering how to dispose of their new found wealth after collecting a tasty £70,000 from a National Lottery Scratchcard.

A new car and a trip to Disneyland in Paris are just a couple of options on the shopping lists of Stephen Inglis (46), from Bangor, and Frank McCormick (44), from Newtownards.

The pair struck it rich on a Jewel 7s Doubler Scratchcard that they bought from Centra in Holywood.

And the best mates have a diet plan to thank for fattening their bank balances, after ‘binning’ their sausage rolls in exchange for Lottery gold.

“We’re still in total disbelief,” explained Stephen who has known Frank for nine years and worked with him for the last four.  “Every day when we’re driving the bin lorry, we listen to Johnny Hero’s ‘Minute To Win It’ quiz on U105 and see who can get the most answers right – with the loser buying the sausage rolls.

“However Frank’s been on a diet recently so we swapped the sausage rolls for scratchcards – but we never thought we would win.  All I can say is thank God that Frank needed to lose a bit of weight,” he laughed.

Normally the duo choose a random scratchcard but, not having any success with this method, Stephen decided on this occasion to choose a Jewel 7s Doubler Scratchcard which they took back to the lorry and scratched in the car park.

“Obviously I thought Frank was talking garbage but he insisted that he wasn’t so we took the card back into the Centra and they told us to ring Camelot as they couldn’t pay such a large amount over the counter!

“We phoned Camelot and the rest is history.  They confirmed our win and we still can’t believe it.  It feels like it’s not really happening, but we’re not complaining,” he added.

Stephen said he won’t waste his share of the winnings but instead will take his time deciding how to spend it after a celebratory meal with his children.

Frank however already has his eyes on a new car and also wants to take his family to EuroDisney and pay off a few debts.

“We’re still in shock since we won,” said Frank, who has lost two stone since he started his diet.  “Neither of us have ever really won anything much before but it just goes to show that it can happen to anyone.

“I can certainly recommend this diet though,” he joked.  “On one hand I’ve lost 28 pounds but on the other I’ve gained 35 thousand!”

National Lottery GameStore is the home of scratchcards and online Instant Win Games, offering players many different and exciting ways to play and win life-changing prizes.

The National Lottery has been changing the lives of winners like Stephen and Frank as well as communities across the UK for more than 21 years with players raising, on average, over £36 million for National Lottery-funded projects every week.

In Northern Ireland alone there have been well over 20,000 individual National Lottery grants awarded to individuals, organisations and projects across the arts, sports, heritage, health, education, environment, charity and voluntary sectors.