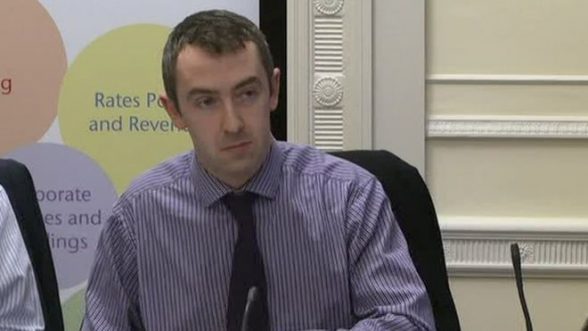 BREAKING NEWS….SINN Fein’s Daithí McKay has resigned as MLA for North Antrim over allegations he coached loyalist blogger Jamie Bryson in how to present his evidence at Stormont inquiry into the Nama loan sale.

And Mr McKay has also been suspended from Sinn Féin with immediate effect.

The party’s chief whip Carál Ní Chuilín says his resignation letter has been submitted to the Assembly speaker’s office.

His resignation came not long after the party’s deputy first minister Martin McGuinness said Mr McKay should “consider his position”.

In a statement, Mr McGuinness said: “I want to state categorically that I had absolutely no knowledge of this exchange or contact and having spoken to all relevant personnel in the assembly.

“I am now entirely satisfied that Sinn Féin had no knowledge of any such contact.”

The DUP say the PSNI should investigate the ‘coaching’ allegations.

The allegations are based on leaked messages between Jamie Bryson, Sinn Féin’s Daithí McKay and another Twitter user, Thomas O’Hara, a member of Sinn Féin.

The messages were exchanged before Mr Bryson appeared at Stormont’s Nama Inquiry.

The Stormont Finance Committee inquiry, chaired then by Mr McKay, was set up last year due to political controversy over the multi-million pound sale of Nama’s Northern Ireland property portfolio.

Last September, Mr Bryson used a meeting of the Stormont Finance Committee to name former DUP leader Peter Robinson as the individual he referred to as “Person A” in relation to the scandal.

The then first minister of Northern Ireland strongly denied he had sought to benefit in any way from the multi-million pound property deal.

It is now claimed that Mr McKay and another Sinn Féin member advised Mr Bryson about his evidence before the hearing.

The leaked social media messages, obtained by The Irish News and The Nolan Show, reveal that on September 17 2015, Mr McKay sent a direct message to Mr Bryson, telling him to follow a Twitter account in the name of Thomas O’Hara, who is understood to be a fellow Sinn Féin member.

The following day, a direct Twitter message from Mr O’Hara to Mr Bryson said: “You may only get 10-15 seconds on this before Daithi as chair has to pull you on it so squeeze your best points on this into 1-2 lines and come straight to the point.”

Another message from him said: “Keep it short if you can, when it’s said it’s said and its privileged. Will be a great finisher.

The DUP’s Peter Weir told the Nolan Show that Mr McKay’s position could now be untenable.

“If the allegations which are carried today are shown to be correct and accurate, I think it’s the most scandalous breach of the position of a committee chair that I’ve seen,” Mr Weir said.

“The actions have been highly inappropriate and indeed, run a coach and horses through the processes of the assembly.”

Mr Bryson told the BBC that allegations he had been coached by Sinn Féin before giving evidence were “absolute nonsense”.

“I can categorically state that the source of my information did not come from Sinn Féin,” the blogger said.

He said he stood by the testimony he gave to the Stormont inquiry and added he would not co-operate with any investigation into how the information was leaked.

“I won’t be co-operating with any investigation into who I talked to, who my sources are. They can throw me in jail first,” said Mr Bryson.