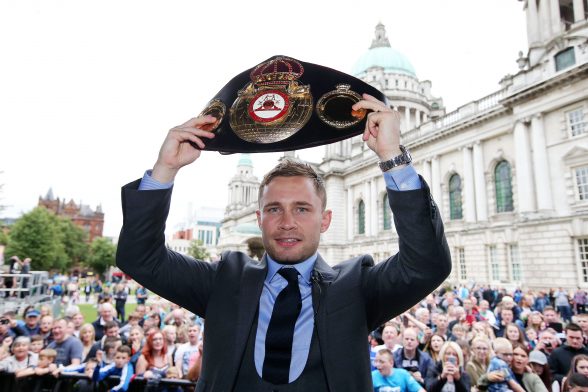 AROUND 6,000 diehard fans have packed into the grounds of Belfast City Hall this evening to cheer on Belfast’s ‘Golden Boy’ of boxing Carl Frampton.

It is almost two weeks since Carl became a double world champion after beating WBA featherweight champion Santa Cruz in his backyard in America.

The north Belfast lad recently returned from the USA and Belfast City Council decided to put on a homecoming reception for Carl in honour of his outstanding achievement in the ring.

The event took place in the grounds of Belfast City Hall and was attended by thousands of the Jackal’s loyal fans.

First Minister, Arlene Foster said: “Tonight is a proud night not just for Belfast but for all the people of Northern Ireland.

“Carl Frampton has brought immense excitement and joy to the boxing and sporting world but also to non sports fans.

“I am incredibly proud of Carl Frampton for his boxing achievements but also the manner in which he conducts himself making him a superb ambassador for Northern Ireland.

“Carl Frampton is a world star but he hasn’t forgotten his roots and it is only right and proper that his many fans and supporters were given the opportunity to congratulate him in Belfast on his latest victory.

“I wish Carl Frampton every success for the future.”

The deputy First Minister, Martin McGuinness said: “It was an honour and a privilege to congratulate double world champion Carl Frampton tonight in Belfast.

“Tonight is an important night for the people of Belfast and beyond as it gives them the chance to congratulate Carl Frampton in person. The rapturous reception Carl received tonight reflects the regard in which Carl is held by his many supporters.

“Carl’s latest victory has made him one of the finest boxers in his generation and I wish Carl, Shane and Barry McGuigan every success in the next chapter of this sporting fairytale.”

Sports Minister, Paul Givan said: “The vast crowd which gathered at the City Hall is testament to the impact that Carl Frampton has on the people of Northern Ireland. “It was important to host this event at City Hall to allow Carl’s many fans to show their support to him and they did him proud tonight.

“Carl’s win over Leo Santa Cruz on 30 July in New York was truly inspirational and Northern Ireland now has a double world champion at super bantamweight and featherweight. These achievements are exceptional and demonstrate the commitment and hard work that Carl has put into his sport.  It is also important to recognise the significant role played by Carl’s wife, family, friends and the team at Cyclone Promotions, particularly Barry and Shane McGuigan and the support they have provided Carl on this fantastic journey.

“Carl continues to inspire so many of our young men and women to get involved in boxing and sport in general.  Boxing has always been an important sport in Northern Ireland and there is no doubt that it brings so many benefits to individuals such as good health and self discipline. I am committed to continuing to support the development of boxing across all communities in Northern Ireland in whatever way I can.

“I would like to once again say congratulations to Carl and I look forward to following his career and successes in the future.”

The Lord Mayor, Alderman Brian Kingston, said: “It is great to see our city coming together tribute to a fantastic sportsman who is a role model not just for boxing but for sport in general and what it can contribute in life skills and opportunity.

“Carl is hard working, determined and focused, and a first-class ambassador for Belfast – he never forgets where he comes from and often pays tribute to it and its people. This evening is giving the people of Belfast the opportunity to pay their own well-deserved tribute to him – an extraordinary champion and an even more extraordinary man who has his roots firmly planted at home.

“Congratulations to Carl, his family and his support team – you have made everyone so proud and now we are showing how proud we are of you,” added the Lord Mayor.

He told ‘The Jackal’s’ fans: “You have been unbelievable. You helped Carl win that fight.’

“He is talented. We haven’t reached top of the mountain yet. Thank you.” 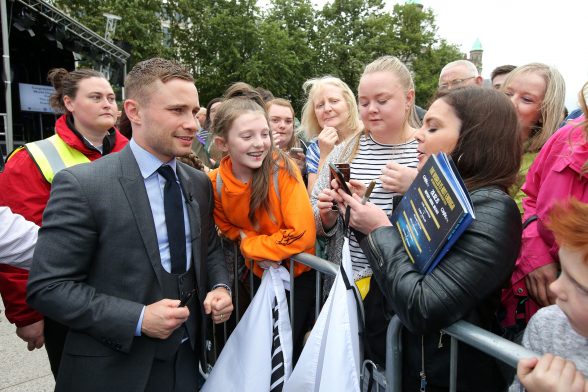