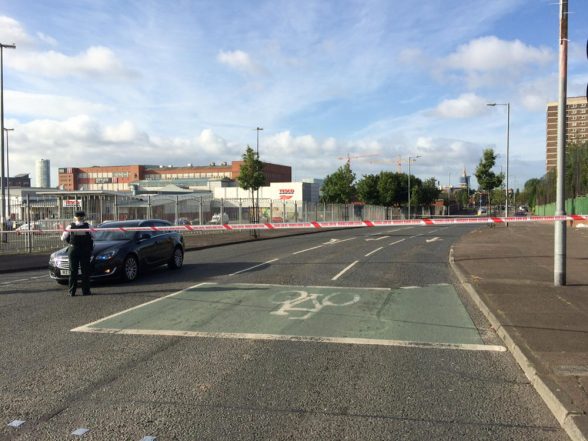 A pipe bomb has been destroyed during a security alert in north Belfast.

The alert started a cylindrical object discovered this morning in North Queen Street.

Police evacuated a number of nearby families from their homes.

Army Technical Officers carried out an examination and said it was a viable device.

A controlled explosion was carried out by an ATO robot.

It has now been removed for forensic examination.

The road between New Lodge Road and Duncairn Gardens was has now been reopened to traffic after police closed it during the alert.

The incident had caused “massive inconvenience, disruption and upset for the local community of north Belfast”, said Det Insp Mary White, who thanked the public for their “patience and cooperation”.

“I am appealing for anyone who noticed any suspicious activity in the North Queen Street area close to Spamount Street or anyone with any information that could assist with the investigation to contact detectives.”

A woman who entered the scene to retrieve a football was handcuffed and taken away by police for breach of a PSNI cordon.