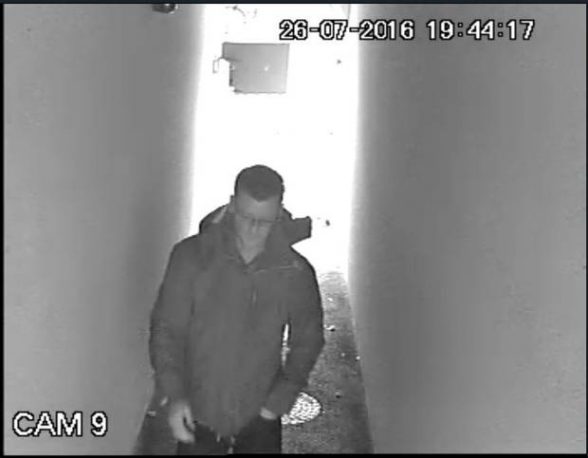 Dessie Mee inside Millar’s House last week. Four minutes later he was thrown to his death

DETECTIVES investigating the suspicious death of Dessie Mee in Newtownards last week have issued a compilation of CCTV footage of the 45 year old minutes before his death.

The footage shows Mr Mee entering the Millers House complex from Regent Street and then walking along an entrance corridor and across a courtyard before entering a lift to go to an apartment on the third floor.

Four minutes after entering the complex, Mr Mee was found on the ground floor having left apartment number 25 from a window.

One line of enquiry by police is that he was thrown to his death.

Mee changed his name from Dessie Gallagher after being released from prison after receiving a 12 year sentence for rape.

He also had convictions for abusing young girls while a teenager.

“I am convinced that the answer to what actually happened to Dessie lies in the local community and particularly with anyone who was in Millers House that night, Tuesday 26 July.

“Some people have come forward and spoken to us. Others have not.

“I would urge anyone with information about the events of that night or the preceding days to contact detectives on the non-emergency number  101 or use the independent charity Crimestoppers on 0800 555 111.”

Two men and a woman arrested last week as part of the investigation remain on bail pending further enquiries.