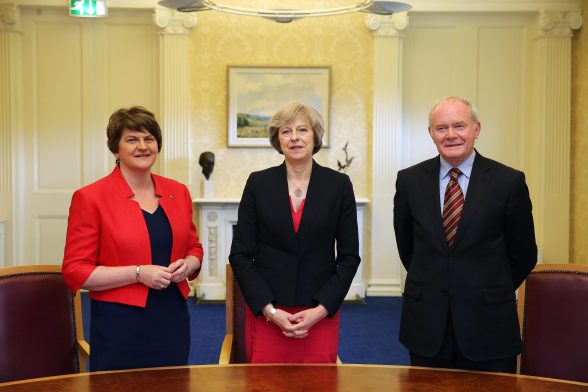 THERESA May has arrived in Northern Ireland for a meeting with the First and Deputy First Minister.

She said before leaving London that the UK’s exit from the European Union “must work for Northern Ireland” ahead of her first visit since becoming prime minister.

Mrs May is meeting Stormont’s first and deputy first ministers on Monday.

Speaking before she left London, she said she viewed Northern Ireland as a “special and valued part” of the UK.

She added: “Peace and stability in Northern Ireland will always be of the highest priority for my government.”

Mrs May has visited Northern Ireland before, most recently as home secretary when she campaigned for a Remain vote in last month’s EU referendum.

However, is her first journey to Belfast as prime minister since she took over from David Cameron 12 days ago.

It follows similar meetings in Scotland and Wales, and in a statement she said she was “delighted to be visiting Northern Ireland”.

“I made clear when I became prime minister that I place particular value on the precious bonds between the nations of the United Kingdom.

“I want to assure the people of Northern Ireland that I will lead a government which works for everyone across all parts of the United Kingdom, and that Northern Ireland is a special and valued part of that union.”