GOLFERS TEE UP FOR THE INAUGURAL OSCAR KNOX CUP COMPETITION 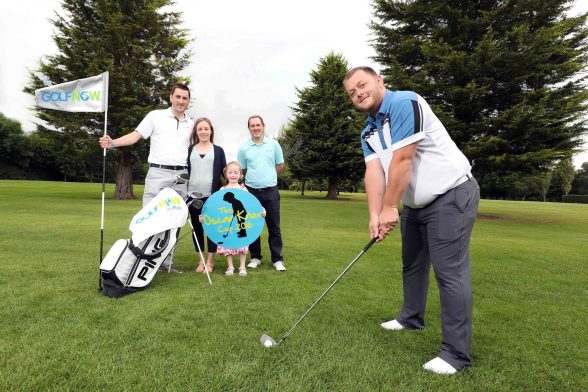 Pictured getting ready for the event at Fortwilliam Golf Club are (L-R) Stephen Knox, Leona Knox, Isobella Knox, Andrew Hollywood of GolfNow and snooker player Mark Allen.
Teams can register by emailing oscarknoxcup@gmail.com but places are limited so people will need to be quick to avoid disappointment.

THE Ryder Cup won’t be the only big golf event taking place in September following the launch of the inaugural Oscar Knox Cup in association with GolfNow which will give local golfers a chance to ‘test their metal’ against a host of Northern Ireland’s sporting celebrities.

Oscar Knox, or ‘Wee Oscar’ as he was affectionately known, captured the hearts of the nation during a two-and-a-half year battle with cancer and this event has been created in his memory by parents Stephen and Leona to raise funds for childhood cancer research with Solving Kids’ Cancer.

The Oscar Knox Cup in association with GolfNow will take place at Fortwilliam Golf Club on Friday September 9, 2016.

And already confirmed to tee off at the charity event are boxers Carl Frampton and Paddy Barnes, snooker player Mark Allen and local golf wonder-kid Tom McKibben who last year won the Under-12 World Junior Championships at Pinehurst in North Carolina.

Local golfers can also join in the action with a team of four costing just £180, which includes 18 holes of golf, an on-course BBQ, post-round meal, prizes, auction, raffle and evening entertainment.

Teams can register by emailingoscarknoxcup@gmail.com but places are limited so people will need to be quick to avoid disappointment.

“We are really excited about launching this event,” said Oscar’s dad Stephen.

“Not only is September Childhood Cancer Awareness Month, but the event will mark what should have been Oscar’s 8th birthday.

“Oscar enjoyed playing golf and had his own little half set so it is fitting that he can be remembered in this way.

“We have a number of well-known faces lined up to play and there are some fantastic prizes to be won as well as an auction by MC Adrian Logan and some great evening entertainment so we’re really looking forward to it.

“We are also delighted to unveil online booking site GolfNow as the main sponsor for our event and hopefully, with the company’s support, we can make this a really successful annual event.”

“It’s great to be able to give back to the local community, and the story of Oscar Knox touched the hearts of everyone in Northern Ireland.

“We hope to raise as much money and awareness as possible for Solving Kids Cancer.

“We are looking forward to seeing this event grow and to seeing more people get involved in golf especially as the NI Open will be hosted in Ballymena next week and is set to be a great sporting event with something for all the family,” added Brian.

His parents Stephen and Leona launched ‘The Oscar Knox Appeal’ in June 2012 in a bid to raise funds for potentially lifesaving immunotherapy treatment in the USA.

In just a few months the family had raised the £250,000 necessary to fund Oscar’s immunotherapy treatment.

However, in a devastating twist of fate Oscar fell seriously ill soon after arriving in Philadelphia and was unable to receive the treatment.

He spent several weeks in intensive care at the Children’s Hospital of Philadelphia before being fit enough to fly home to Belfast by Air Ambulance.

Oscar was thought to be free of the cancer but the family knew that having not received immunotherapy there was a very high chance of relapse.

In August 2013 the family’s fears were realised when the disease returned. 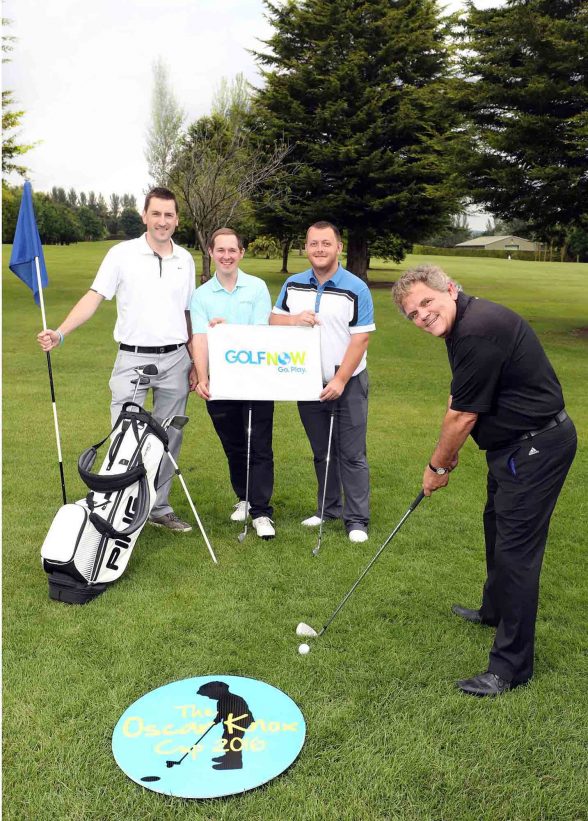 GolfNow is the world’s biggest provider of online golf booking technology with its International HQ based in Belfast.

Owned by the Golf Channel and part of the BRS Golf group, the company has offices in Belfast and employs more than 70 staff in Northern Ireland.

A staggering 22.5 million rounds were booked in the UK and Ireland via GolfNow last year – almost one every second!

Founded in 2001 with headquarters in Orlando, USA, GolfNow operates in more than 16 countries and provides tee-time access to more than 9,000 courses for more than 3.5 million registered users worldwide.

BRS Golf was founded in 2003 by local golf fanatics and IT experts Brian and Rory Smith, and was acquired by Golf Now in June 2013.

This strategic alliance gave the local company global status, becoming a division of the Golf Channel television network and positioning it as one of the leading providers of golf technology in the world.

The Golf Channel is seen in more than 200 million homes worldwide and part of the NBC Sports Group. 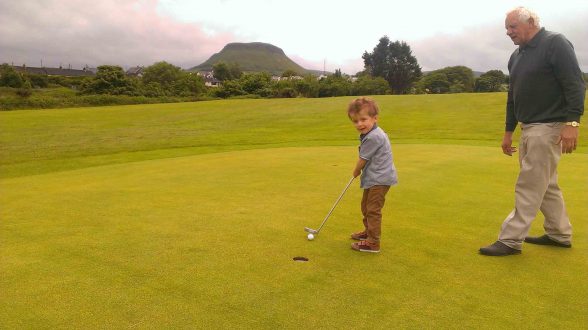 GET IN THE THE HOLE….Little Oscar Knox who loved to play golf but tragically died in May 2014 from a rare form of cancer