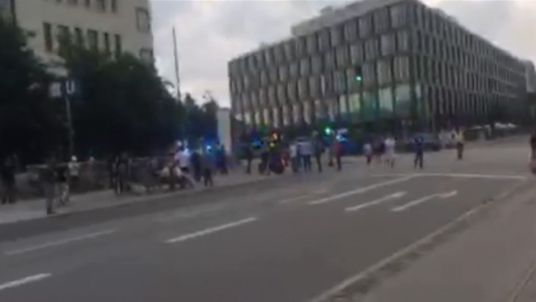 TERROR is back on the streets of Europe this evening just a week after a truck ploughed into crowds in Nice killing 86 people and injuring scores of others.

“Multiple people” have been killed and injured in a shooting at a shopping centre in the German city of Munich, police have confirmed.

A police spokeswoman says they believe more than one shooter is involved in the attack at the Olympia-Einkaufszentrum mall.

There are unconfirmed reports of a second shooting at the Stachus metro station in Munich city centre.

“We believe we are dealing with a shooting rampage,” an official said.

Some people remain trapped inside the shopping centre, and officials are still evacuating them.

German media reports suggest at least 15 people have been killed, but this is unconfirmed.

A witness live-streaming from outside the mall said: “(The gunman) ran into the underground station. Police are looking for him. I don’t have a description of the shooter.

An employee who is still inside the shopping centre told Reuters by phone that “many shots were fired” and they have seen at least one person with serious injuries.

Services on multiple train, tram and bus lines have been suspended, transport officials in Munich have said.

One person has been confirmed dead so far and 10 are injured, according to the AFP news agency.

There are currently no details on who was responsible for the shooting, but Munich Police are urging locals to stay in their homes as a “large police operation” is under way.

Footage from the scene appeared to show people running away to seek shelter – and there are local reports that some civilians are still trapped inside the shopping centre.

Video recorded by locals in Munich shows dozens of emergency vehicles rushing past rush-hour traffic to get to the scene. Police and firefighters are seen near a shopping mall amid a shooting on July 22, 2016 in Munich.
Several people were killed on Friday in a shooting rampage by a lone gunman in a Munich shopping centre