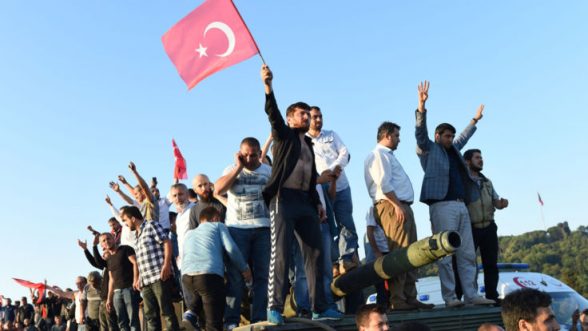 People on the streets of Turkey celebrating as military coup fails

THE Turkish government say a military coup trying to seize control of the country amid has failed.

But he said the coup – made up of military from junior to senior ranks – had not succeeded and he was back in control.

Around 161 people are reported dead and 1,400 injured in clashes.

The Foreign Office say that Secretary of State Boris Johnson had been informed of the coup bid last night as the news broke.

A statement is expected to be issued later today by the Foreign Office on travel.

But its website last night had no advice for travellers on the latest coup, only advice about staying out of areas in Turkey close to the border with Turkey.

Turkey is a very destination at this time of the year for Northern Ireland holidaymakers.

An announcer on Turkey’s state broadcaster TRT last night read out a live statement, reportedly on the orders of the military, saying the country is now being run by a “peace council”.

It comes after the NTV broadcaster quoted the army as saying: “Power in the country has been seized in its entirety.”

The Turkish Prime Minister Binali Yildirim later confirmed that military action wataking place, describing it as an illegal “attempt” by a faction of the army to seize power.

A Turkish state news agency reported that a top general was among several people being “held hostage” at the military headquarters in Ankara.

It followed media reports that ambulances had been seen in front of the building.

NTV showed footage of tanks at the entrance to Istanbul’s Ataturk airport.

According to Turkish media, the military statement said it had taken action to: “reinstall the constitutional order, democracy, human rights and freedoms, to ensure that the rule of law once again reigns in the country, for the law and order to be reinstated.”

The military statement went on to say that “all international agreements and commitments will remain. We pledge that good relations with all world countries will continue.”

Mr Yildirim had called for calm, saying security forces are doing what is necessary to resolve the situation.

He warned that those responsible for this “illegal attempt ” will pay the “highest price.”

Now with the coup almost over, the Prime Minister has warned that those behind it “will be punished”.

Russian airlines have since suspended flights to Turkey until the situation returns to normal.

Other countries may follow suit as a temporary measure. 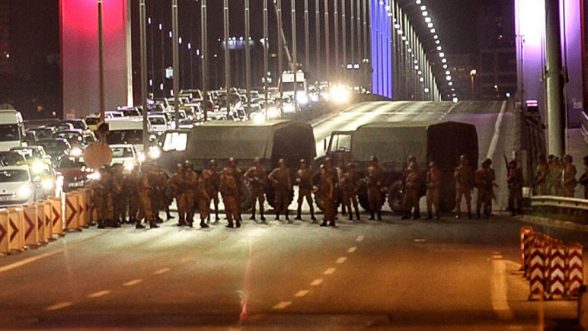 Turkish soldiers block Istanbul’s Bosphorus Bridge on July 15, 2016 in Istanbul, Turkey. Istanbul’s bridges across the Bosphorus, the strait separating the European and Asian sides of the city last night