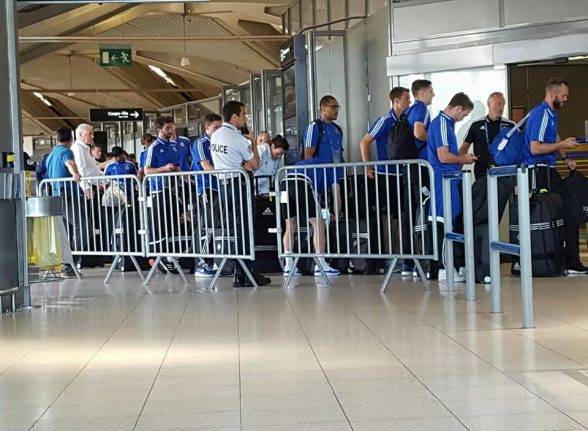 THE NORTHERN Ireland team are preparing to board their flight for their official welcome home from Euro 2016 in Belfast later today.

As our picture shows, the Green and White Army players are currently checking for their flight back from Lyon airport France to Belfast International Airport.

Michael O’Neill’s side reached the last 16 stage before losing 1-0 to Wales in Paris on Saturday.

Sports Minister Paul Given said:”Michael and the team have made the whole country proud.

“It has been fantastic to see the green and white army getting behind their team, both in France and back home.”

The event will take place at the Belsonic Fan Zone site in the Titanic Quarter, where Northern Ireland supporters flocked to watch the team in their opening three matches.

Northern Ireland were appearing in their first major tournament for 30 years and a 2-0 win over Ukraine helped them to progress from the group stage.

An own goal from Gareth McAuley on Saturday proved decisive against Wales as Northern Ireland bowed out in Paris.

Today’s event is being hosted by the Department of Communities, Irish FA, Belsonic and Belfast City Council.

The Minister added: “It will give the fans the opportunity to see the team as they return from their historic journey in France.”

It is a ticketed event with tickets are available through Ticketmaster.

There will be a nominal £2 admin charge per ticket, £1 of which will go to NI Cancer Fund for Children, the official charity of both the Irish FA and Fan Zone.

Parking is not available at the venue so fans are encouraged to use public transport.