EURO 2016: HEARTBREAK FOR NORTHERN IRELAND AS OWN GOAL ENDS DREAM OF QUARTER FINAL 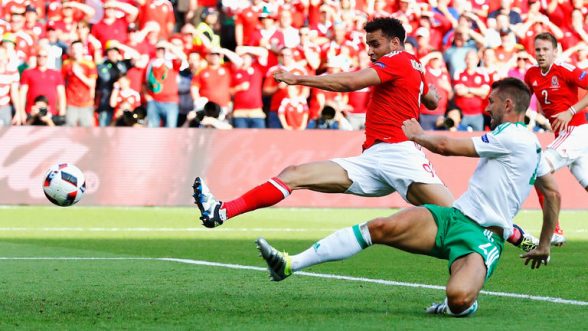 A late own goal by Gareth McAuley sent Wales through to the quarter-finals of Euro 2016 with a 1-0 win over Northern Ireland at the Parc des Princes this evening.

Gareth Bale produced the cross from the left, and with Wales substitute Hal Robson-Kanu anticipating a tap-in, McAuley turned past his own goalkeeper from close range on 75 minutes.

In the first match between two British teams in the knockout stages of a major tournament, Aaron Ramsey had a goal correctly ruled out for offside for Wales, who largely restricted Northern Ireland to shots from distance.

Jamie Ward and Stuart Dallas each tested Wales goalkeeper Wayne Hennessey in the first half, but Michael O’Neill’s side struggled to carve out another clear-cut opportunity as the match progressed.

Wales, who will play in the quarter-final of a major competition for the second time in their history, march on in France and will face the winner of Hungary against Belgium on Friday night in Lille.

Kyle Lafferty replaced Conor Washington in attack for Northern Ireland in their only alteration from their 1-0 defeat by Germany, and they started the brighter team against an unchanged Wales side.

The first chance of the match arrived when a swift counter-attacking move picked out Dallas on the edge of the box, his first-time shot drawing a smart save from Hennessey.

Northern Ireland’s pressing continued to cause Wales problems as Coleman’s side struggled to find their fluency in the first half, but they did have the ball in the net after 19 minutes through Ramsey.

The Arsenal midfielder, who opened his tournament account in the 3-0 victory over Russia, reacted first to turn home Sam Vokes’ knock-down but was correctly adjudged offside.

In a half of few chances Hennessey then turned a firm strike from Ward over the crossbar, while the period ended for Wales without a shot on target and with top scorer Bale restricted to a single effort from 25 yards.

But they improved after the break and went close to breaking the deadlock when Vokes headed Ramsey’s curling cross wide of Michael McGovern’s goal.

The Northern Ireland goalkeeper, who turned in an inspired performance against Germany to help his side reach the knockout stage,

was finally called into action after 58 minutes, palming clear a dipping free-kick by Bale.The Real Madrid superstar had been expertly shackled by a tenacious Northern Ireland defence up to that point, but with extra time looming, he stepped up with a moment of quality to send his side through.

Ramsey slipped Bale in down the left and the forward whipped in a fizzing low cross that McAuley could only turn goalward with Robson-Kanu waiting to pounce.

O’Neill threw on Niall McGinn and Josh Magennis as Northern Ireland went in search of a dramatic equaliser but they failed to test Hennessey again as their impressive tournament run came to an end in Paris.

The only concern for Wales may be an injury suffered by captain Ashley Williams, who played the final ten minutes with his left arm motionless after a heavy collision with team-mate Jonathan Williams.

The defender has six days before Wales are in action again, with their quarter-final opponent set to be confirmed on Sunday night when Hungary play Belgium in Toulouse.