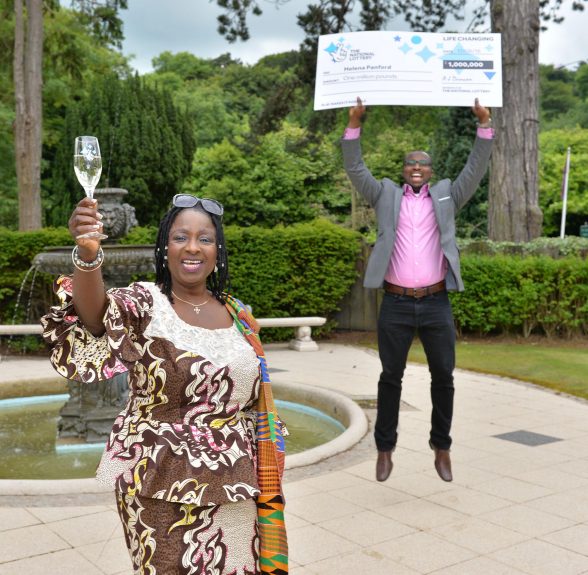 Youre never Ghana believe it! – Helena Panford (59), originally from Ghana, pictured with her brother, Patrick, won a staggering £1 million pounds after her bus broke down on the way to work.

EVERY misfortune is a blessing, said Belfast woman, Helena Panford after her bus broke down on the way to work, but no one could have predicted that it would mean a EuroMillions win of £1 million!

Whilst waiting on the next bus to arrive, 59-year-old mother of two, Helena, visited a nearby shop in Belfast to kill time.

“I was on my way to work in Belfast when the bus broke down so, after rolling my eyes at the misfortune, and telling myself that every misfortune is a blessing, I popped into a nearby shop and bought a ticket for the Friday EuroMillions draw,” said Helena, who is originally from Ghana.

“I was so worried that I was going to be late for work that the last thing on my mind was that I would win a million pounds!”

It wasn’t until 24 hours later that Helena decided to check her ticket, which she purchased in Russell’s Shop 4 U on the Albertbridge Road, east Belfast, and discovered she had matched the unique EuroMillions UK Millionaire Maker code in the draw on Friday 17 June to win a guaranteed £1 million

She continued:  “After checking my numbers I realised I hadn’t won the jackpot but my daughter in Ghana encouraged me to take the ticket to the shop where I purchased it, to be sure.”

The next day Helena took her ticket to a shop in Belfast city centre, where her life was to take a wonderful twist.

“The lady working in the shop checked my ticket for me and the first thing I noticed was the shocked look of joy on her face.  She looked at me and screamed, ‘you’ve won £1m’ and I immediately dropped to my knees from shock and started to cry.”

“The staff were so great with me and were able to calm me down but to be honest I have never felt so happy and we continued to laugh and jump around!”

Helena, who has family staying with her at the moment on holiday, is Northern Ireland’s latest millionaire but she always thought she would be a lottery winner

“I have won small amounts in the past, like £100, but when I visited Ghana recently for a family event I told some family members that I felt sure I would win big one day and would be in a position to help them all,” explained Helena.

She added:  “When I dreamed of winning, I had an amount of £5k in my head so winning this huge amount of money means that I can now help my family and, in particular, fulfil a dream that my daughter has of coming to Northern Ireland to study for her PhD.

“I also have a granddaughter with a learning disability who I can’t wait to treat to a holiday.

“I want to treat myself as well and am hoping to buy a house and a car but I first need to pass my test!” she concluded.

Every week EuroMillions UK Millionaire Maker guarantees to create two millionaires – one on Tuesday and one on Friday. 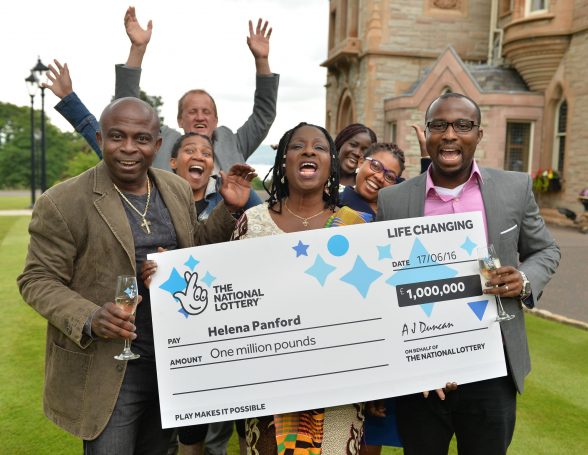