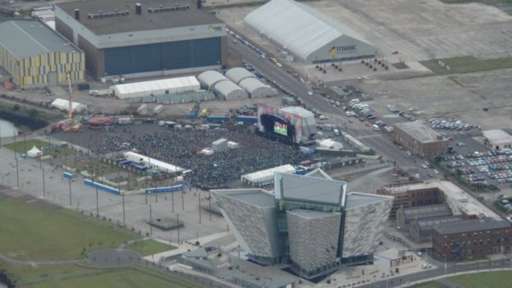 A new Belfast fanzone has been organised following the unavailability of the area beside Titanic Belfast because of a concert at the venue.

The Northern Ireland and Republic of Ireland Euro 2016 games will now be shown at Boucher Road playing fields.

However, the venue is hosting Belsonic concerts this weekend.

That is when both teams play knock-out stage games.

Northern Ireland will play Wales on Saturday, with the Republic of Ireland playing France on Sunday.

The Lord Mayor of Belfast, Brian Kingston, said Boucher Road playing fields was a “great site, accessible to all parts of the city, and beyond”.

“By locating the fan zone here, the council is ensuring as many fans as possible get the chance to continue to demonstrate their phenomenal support for both teams as they enter this crucial knock-out stage.”

Belfast City Council said details about gate opening times and entry terms for the fanzone would be published on its website on Friday.