WE’RE THROUGH! NORTHERN IRELAND INTO LAST 16 AFTER TURKEY BEAT CZECHS 2-0 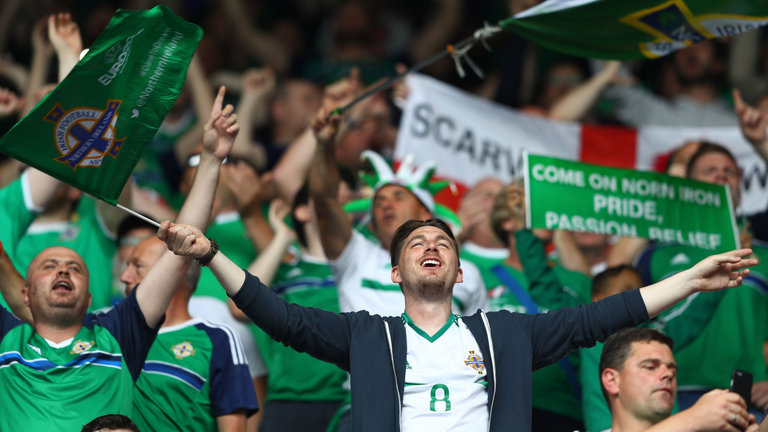 THE sweat is over and the dream is still alive.

Tonight, Northern Ireland have reached the last 16 thanks to Turkey who beat the Czech Republic 2-0.

Now Michael O’Neill’s men will find out in the next 24 hours who they will faces.

Northern Ireland will either play France or Wales this Saturday.

Northern Ireland went through despite losing 1-0 to Germany and finishing in third place in Group C.

If it was a singing competition, then the Northern Ireland fans would have won the game hands down.

For 90 minutes, the thousands of Green and White Army supporters who travelled to Paris showed why they are the best fans in the world.

Pundit Alan Shearer applauded them at the end of the game for signing their hearts out in support of Michael O’Neill’s players.

The fans rocked the Pairc de Princes with their ‘Will Grigg’s On Fire’ song which resonated around the ground.

The world champions created ample chances against third-place finishers Northern Ireland but only took one of them through Mario Gomez as they found goalkeeper Michael McGovern in inspired form.

McGovern will now have a posse of clubs knocking on his door as he is currently without a club. 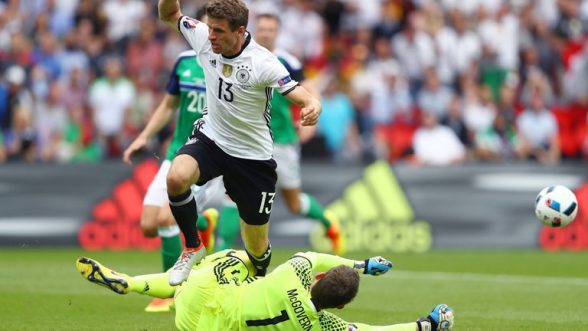 Meanwhile, Germany will face a third-placed team from Group A, B or F in the last 16.

Germany set up camp in the Northern Irish half from the first whistle and barely left it for the following 90 minutes.

McGovern was quickly to the forefront of the action. He was quick off his line to deny Thomas Muller on nine minutes before blocking further attempts from Mario Gotze and Mesut Ozil.

Muller headed against the post on 28 minutes but McGovern’s defence was breached two minutes later.

Ozil, who was working his magic in midfield, released Muller in on goal and he teed up Gomez to fire home via a Gareth McAuley deflection.

Jamie Ward registered Northern Ireland’s only shot on target in the game just before half-time – a speculative 30-yard strike that was straight at Manuel Neuer.

Gotze was again thwarted by a strong McGovern right hand just after the break.

With Northern Ireland posing little threat at the other end, Germany took their foot off the gas in the closing stages but did nearly double the lead through Gomez, whose header was clawed away by McGovern.

The soon-to-be out-of-contract Hamilton goalkeeper did his chances of finding a new club no harm with this performance as the Green and White Army’s amazing adventure looks likely to roll on to the knockout stages.

Cheering on the GAWA were many diginitaries from Northern Ireland.

And he was joined in the stands by big Northern Ireland fan Rory McIlroy. 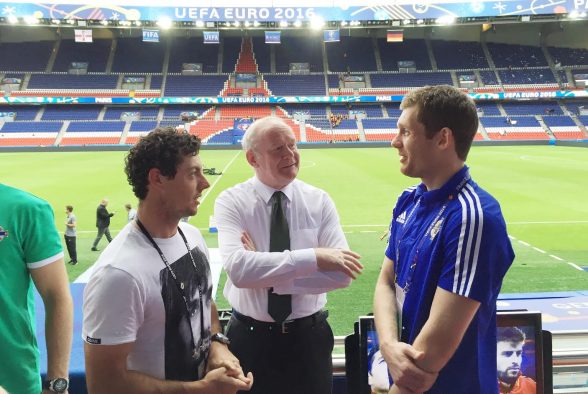