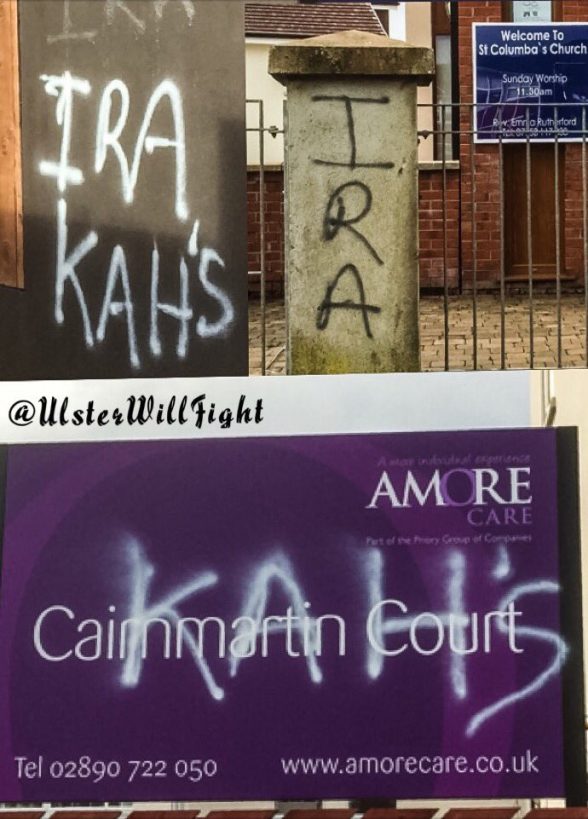 POLICE have launched a religious hate crime probe after sectarian graffiti was daubed on the walls of a church and several homes in west Belfast.

A residential home specialising in care for dementia patients also had slogans painted on it during Sunday night.

The sectarian attacks happened in the the Springfield and Highfield areas of west Belfast.

Police are treating the damage as a sectarian hate crime and said they would be examining CCTV footage.

DUP councillor Frank McCoubrey said people in the area were angry at what had happened.

“Their families have arrived today and people going to work have seen.. this graffiti, that has been put outside their place of work.”

Police have appealed for anyone who saw any suspicious activity in the area to contact them on the 101 number.

Alternatively, information can be passed anonymously to Crimestoppers on 0800 555 111

Insp Kelly Moore said: “We are treating this as a sectarian hate crime and extensive enquiries are already under way.

“Officers from both the neighbourhood policing team and the local policing team have been in the area this morning to help with the investigation and to offer reassurance to local people.

“We have also spoken with local representatives,” added Inspector Moore.