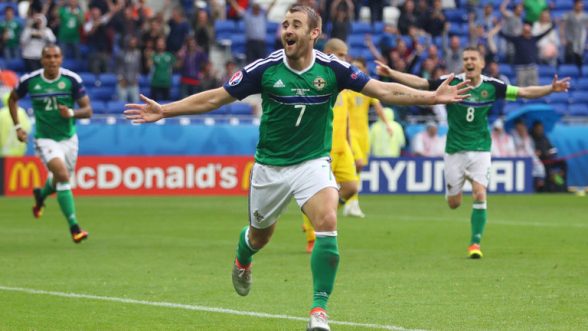 NORTHERN Ireland secured their first ever victory at a European Championship with a magnificent 2-0 win over Ukraine.

Goals from Gareth McAuley and substitute Niall McGinn gave Michael O’Neill’s team their first ever points in an historic win at the Stade de Lyon.

It means Northern Ireland are now on three points in Group C, level with Poland and Germany who face each other at 8pm.

Next up for Northern Ireland is a final encounter against Germany.

Goal hero Gareth McAuley said the historic win: “This will give us confidence going into the game against Germany.

“It is a big game but we will be ready.”

He added: “It is special to score. It will sink in over the next couple of days. It was the team performance tonight. It was a great reaction after the defeat by Poland.

“We had a point to prove to ourselves.

“We thought we let ourselves down in our intensity. But we have put that right. It is pleasing and we will take confidence from it.

“But we have a tough game ahead.”

And in came in Conor Washington supported by Jamie Ward and Stuart Dallas in a 4-3-3 formation.

Aaron Hughes, the 36-year-old defende,won his 101st cap in a back four alongside Gareth McAuley, Craig Cathcart and Jonny Evans.

Corry Evans came into midfield, which meant he and Jonny become the first brothers to play in a Northern Ireland team at a major tournament.

Northern Ireland started the game in a defensive formation.

But the Green and White Army broke the deadlock through McAuley’s wonder header in the 49th minute from a Norwood cross as the heavens opened.

Niall McGinn sealed the victory in the last few seconds of additional time sending the thousands of Northern Ireland fans wild in the stands around the ground.

At one point, the referee took the players off the pitch as the rain turned into large hail stones.

Up next for Northern Ireland is tournament favourites Germany and the GAWA will be buoyed by their performance.