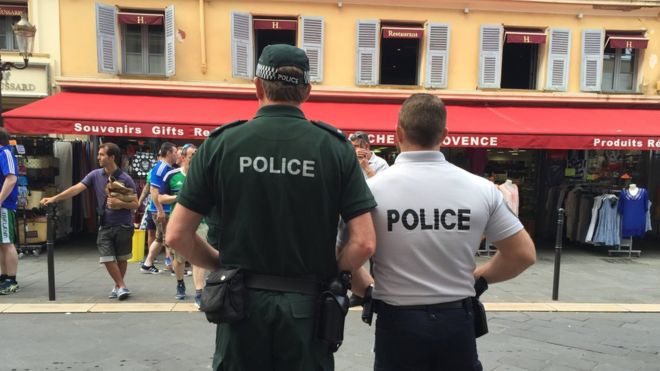 SIX Northern Ireland football fans have been injured after they were attacked by French thugs outside a bar.

Supporters of Northern Ireland and Poland were in the pub together on Saturday night enjoying drinks and singing songs ahead of this evening’s clash.

Police said French hooligans started the trouble at about 23:00 local time, but about a dozen Northern Ireland fans retaliated and one was arrested.

One Polish fan was also injured.

A group of 20 to 30 French hooligans arrived outside the pub where Northern Irish fans and Polish fans were drinking and singing.

Bottles were thrown and punches were exchanged.

PSNI Supt Nigel Goddard of the Police Service of Northern Ireland is in the city on the south coast of France as part of an international policing operation for the tournament.

He said: “It’s clear to me that the Nice fans provoked this incident, but a number of Northern Ireland fans did respond.”

But he added that the vast majority of supporters “have behaved really well”.

“They’re having a great time just as we imagined they would,” Supt Goddard said.

“The relationships between the Northern Ireland fans and the Poles have been excellent.

“They’ve been using the same pubs, singing songs and having a great time.”