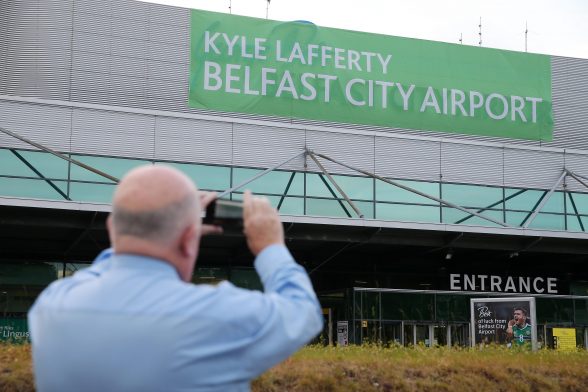 George Best Belfast City Airport displays its support for Northern Ireland at the Euros by changing its name for the day in honour of the team’s star striker Kyle Lafferty.
Photos by Kelvin Boyes / Press Eye

GEORGE Best Belfast City Airport displays its support for Northern Ireland at the Euros by changing its name for the day in honour of the team’s star striker.

For one day only, the airport today has become the Kyle Lafferty Belfast City Airport in a historic move ahead of Michael O’Neill’s men kicking off their Euro 2016 campaign against Poland in Nice this evening.

Signage at the City Airport’s terminal roof and at the entrance has been changed to honour the star striker, while the branding on the airport’s website and digital platforms has also been amended.

Thousands of Green and White Army fans have made the trek to Nice to air, sea and road to cheer on O’Neill’s team.

The GAWA enter the fray this evening at 5 pm on the back of a 12 match unbeaten run – the best record of any team in the Euro 2016 finals in France.

But the match has already been overshadowed with news that at least five Northern Ireland fans were injured last night in Nice.

Reports say the fans were attacked by local Marseille youths.

The attacks marred a great evening in Nice where GAWA fans drank and sang songs with Polish fans in bars.

The 27-year-oldfour-time major winner recorded a motivational video which was shown to Michael O’Neill’s men on the eve of the biggest match of their NI careers.

He said representing his country meant an enormous amount.

“Coming home as a major champion was one of the proudest moments of my career so far,” said McIlroy.

“It’s an honour to represent Northern Ireland around the world – and to put our wee country on the sporting map.

“Today you will write the next chapter in our long and famous sporting story.

“When you walk out at that stadium in Nice, take a moment to think about our sporting icons, what they achieved, and how this is your chance to take your place alongside them.” 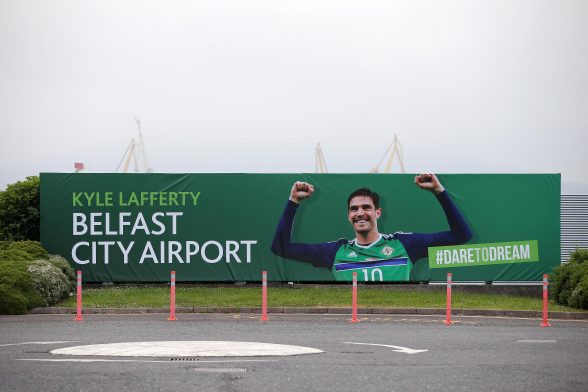