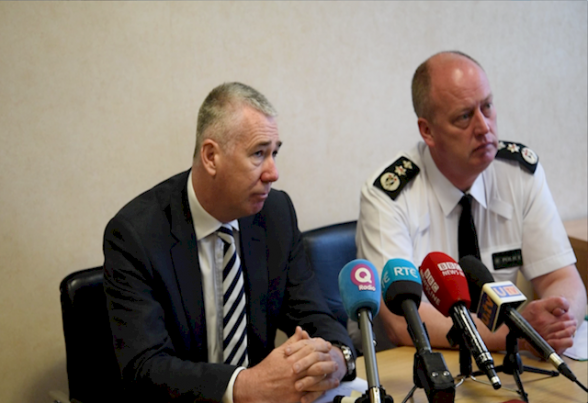 THE PSNI has revealed today that Chief Constable Jon Boutcher, from Bedfordshire Police will lead the investigation into a range of activities surrounding an alleged army agent known as Stakeknife.

The investigation, codenamed Operation Kenova, will look at Stakeknife’s role in around 50 murders.

The probe has now been widened to look at crimes, by IRA members, agents, Army and police handlers.

Stakeknife was unmasked over a decade ago as west Belfast man Freddie Scappaticci.

Chief Constable George Hamilton said: “After taking a number of issues into consideration, I have decided that a team resourced with external officers and staff funded by the PSNI is the most appropriate way forward, given the size, scale and complexity of the investigation.

“Chief Constable Boutcher will have the delegated authority of me as the Chief Constable of the PSNI. He will appoint a Senior Investigating Officer and a team of detectives from other UK law enforcement agencies to progress this investigation.

“I believe this option contributes towards community confidence and reduces the impact on the PSNI’s ability to provide a policing service today.

“I have every confidence in Chief Constable Boutcher and I have no doubt his previous experience when it comes to dealing with highly complex and sensitive investigations will be of great benefit to him as this investigation progresses.” Chief Constable Jon Boutcher, from Bedfordshire Police, added: “I am humbled to have been asked to lead such a critically important and complex investigation.

“I do not underestimate the huge task of establishing the circumstances behind how and why these murders occurred during those dark days.

“My principle aim in taking responsibility for this investigation is to bring those responsible for these awful crimes, in whatever capacity they were involved, to justice.

“The recruitment process for the investigation team will begin immediately, this will require time and I ask for a degree of patience as I do this.

“As soon as officers and staff are in place the investigation team will begin reaching out to victims, victims’ families and all interested parties to receive information. Updates regarding this will be provided on the Op Kenova investigation website at www.opkenova.co.uk

“I am committed to doing all I can to find the truth for the victims and their families. It is them who we should be thinking of throughout.

“It must be extremely hard to have listened to various commentaries within the community and the media about how and why their loved ones died. I hope this investigation ultimately addresses the uncertainties and rumours. All I can promise is an absolute commitment to pursuing the truth.”

The focus of the investigation will be:

Any other matters falling outside the parameters of the investigation will be brought to the attention of the Chief Constable of the PSNI by Chief Constable Boutcher for consideration.

The PSNI Chief Constable will, if necessary, consult with the Director of Public Prosecutions or the Police Ombudsman as to the appropriate basis on which to address these additional matters.

The recruitment process will begin shortly for the team which will be based in secure accommodation in London and will carry out enquiries in Northern Ireland as necessary.

The investigation team will not include personnel who are serving in or have previously served in the RUC, PSNI, Ministry of Defence or Security Services.

The Chief Constable of the PSNI will ensure that mechanisms are in place to update the Director of Public Prosecutions as to the progress of the investigation.

Once the investigation has concluded, a report will be provided to the Chief Constable of the PSNI including any recommendations for the consideration of the DPP.