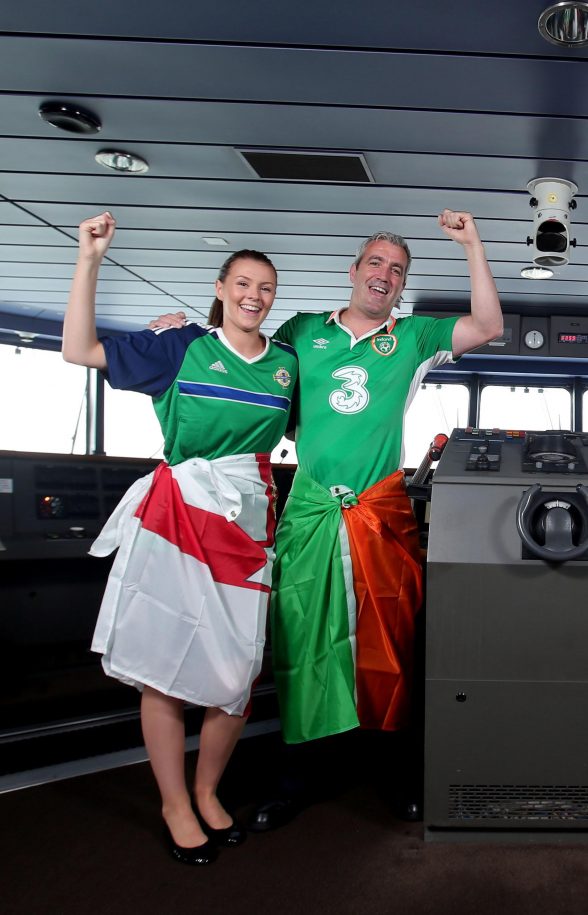 SAIL TO EURO GLORY!!!: Stena Line’s Molly Beattie from Belfast and Brendan Meagher from Tipperary will be cheering on their beloved Northern Ireland and Republic of Ireland football teams in this year’s UEFA Euro 2016 Championship.

AS excitement builds and the clock ticks down to kick-off in this year’s UEFA Euro 2016 Championship, Ireland’s biggest ferry company has pledged its support for the Republic of Ireland and Northern Ireland by offering free ferry travel for lifeto either team if they can bring the prestigious trophy home from France.

Stena Line, which carries more passengers between Ireland and Britain than all other ferry operators combined, is hoping that the added incentive of a lifetime’s free travel on any of its Irish Sea routes will help ensure that it’s plain sailing for Martin and Michael O’Neill and their teams – all the way to the final and ultimate glory in Paris on Saturday July 10.

The offer is open to the manager, entire playing squad and backroom staff of the winning team – but firstly, the team has to negotiate its way through tricky group stages.

By coincidence, Ireland’s first match on Monday June 13 will be against Sweden, the country of origin for Stena Line which is headquartered in Gothenberg, before the team faces Belgium on June 18 and Italy on June 22.

Northern Ireland’s campaign kicks off on Sunday June 12 when they take on Poland in Nice, before lining up against Ukraine in Lyon on June 16 and Germany in Paris on June 21.

Stena Line’s Head of Travel, Irish Sea, Orla Noonan, said that loyalties may be split within the company but that both Irish teams would have a huge amount of support from both staff and travelling customers.

“There is definitely an air of excitement throughout the company and on board our ships as we all prepare for this year’s UEFA Euro 2016 finals,” said Orla.  “In fact, there has been a real buzz ever since the Republic of Ireland and Northern Ireland both qualified for the Finals.  Our direct ferry sailings from Rosslare to Cherbourg sold out in a matter of hours and we also have thousands of fans travelling indirectly though our various routes to Britain, then onwards to France.  Let’s hope they will all be returning happy when the tournament is over!

“If either the Republic of Ireland or Northern Ireland wins the European Championship this year, their entire squad will instantly acquire legendary status – and rightly so – so the least we can to do to help spur the team on to victory is offer a little incentive for all involved in the form of free travel for life between Ireland and Britain.

“The players and management will be invited to take their families and cars across the Irish Sea with them whenever they like – and, in return, we can say that we are carrying the UEFA Euro 2016 Champions on our ships.  It’s a ‘win win’ situation for everyone!” she added.

“Of course, the excitement within Stena Line has been greatly enhanced by the fact that Wales and England – countries in which we also have ferry ports – have also qualified and we’ll be offering those teams free ferry travel if they win as well.

“Add Stena Line’s home country of Sweden to the mix and we’ll all be cheering on our own teams with a friendly rivalry that we hope will be replicated amongst fans in France.  I must admit that we do feel a little sad that Scotland won’t be taking part.  It would have been amazing had they qualified and the Scottish fans would have added so much to the overall occasion,” concluded Orla.

Stena Line is the biggest ferry operator on the Irish Sea, offering the biggest fleet and the widest choice of routes from Ireland to Britain, including Belfast to Cairnryan, Belfast to Liverpool, Dublin to Holyhead and Rosslare to Fishguard routes.  During 2015, the company experienced a significant increase in passenger numbers, carrying more than 2.5 million on its Irish Sea routes.