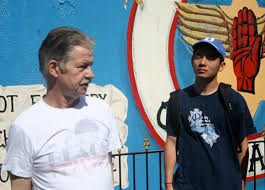 William ‘Plum’ Smith (left who died this morning after a short illness. He had been battling cancer in recent years

He had been battling the ravages of cancer over a number of years but he recently took ill died after a short illness.

‘Plum’ was a key member of the loyalist group which got the UVF, UFF and RHC to call a ceasefire in October 1994.

Smith spent ten years in prison for his role in the shooting of a Catholic in 1972.

Following his released from prison, ‘Plum’ became a member of the PUP.

He also set up the loyalist group Justice For All campaigning for those affected by injustice.

And in later years ‘Plum’ formed the group Alternatives to help ex-loyalist paramilitary prisoners resettle in the community.

In 1994, Mr Smith chaired a press conference in which a statement on behalf of the Combined Loyalist Military Command was read out by Gusty Spence, a founding member of the UVF.

He later served as the chairman of the PUP and was part of the party’s negotiating team around the Good Friday Agreement.

“Plum was in the forefront of negotiating and bringing loyalist paramilitaries into the peace process and politicising the UVF and Red Hand Commando.

“He was a very intelligent fellow, he educated himself in Long Kesh.

“He also took Irish lessons there as well, he called the Irish language his own language.

“He was a clear thinker, he was left of centre politically, he had a heart for ordinary people, for working class people, he tried to provide a voice, a voice which had been neglected.

“He was also happy enough to stretch over the fence and do business with traditional enemies.”

“I valued his commitment & contribution to Peace. My sympathy to his wife & family.”

“A former LPOW who dedicated his life for the betterment of our people. RIP.”