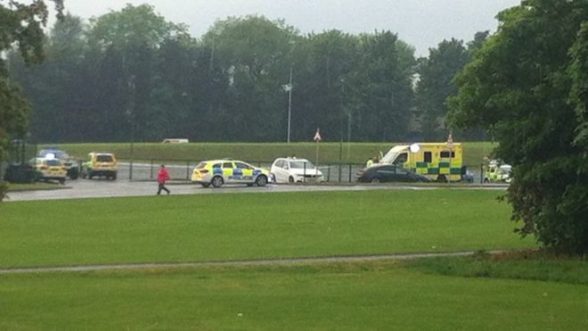 A 37-year-old man and his five-year-old son are in a critical condition after they were struck by lightning this afternoon.

And the man’s seven-year-old daughter is also seriously ill after the incident at Killowen Primary School in Lisburn.

The man was taken to Lagan Valley Hospital in Lisburn.

The children were taken to the Royal Belfast Hospital for Sick Children and are thought to have suffered burn injuries.Image captionThe area around the primary school has been cordoned off

“Following this all other pupils, accompanied by staff, went safely to nearby Laurel Hill Community College where they were collected by parents.

“The thoughts of the entire school community are with the family at this time.”

SDLP councillor Pat Catney described it as a terrible accident.

“It’s awfully tragic news. We have to think of the family.

“I’m thinking of the young father and the children who were injured as well.

“It was just one of those freak tragic accidents that has stunned me and shocked me.”

Mr Catney heaped praise on the actions of the police and the NI ambulance service who he said had “responded very quickly”.

He also paid tribute to parents and teachers at the school who had helped to direct traffic and ensure that children were able to leave safely.

Ambulance crews arrived seven minutes after receiving a report just before 2 pm that a man had been struck by lightning.

It said people should “remain very vigilant when they are out and about” due to the possibility of more thunderstorms.

More storms and heavy rain are expected in part this evening.