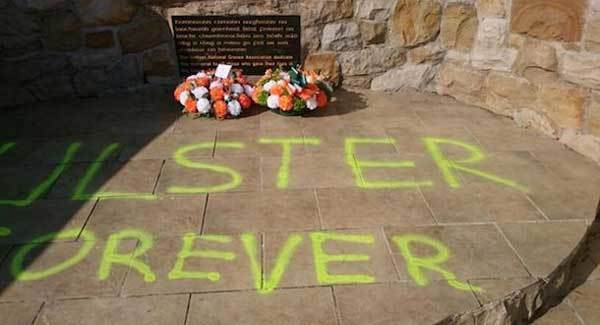 GRAFFITI has been sprayed on a republican memorial stone at Milltown Cemetery in west Belfast.

Vandals defaced an engraving of the text of the Proclamation and the surrounding stonework with spray paint in the overnight attack.

“The Republican Plot in Milltown was desecrated last night in what appears to be a sectarian attack.

“The Irish Proclamation at the memorial was spray painted and headstones were attacked.

“All graveyards are sacred places and should be respected.

“This attack is outrageous and does nothing other than cause distress to families whose loved ones are buried in the plot.

“I would like to commend the National Graves Association who tend to the Republican Plot and whose members are already involved in a clean-up of the graves.

“If anyone has any information about those responsible for this vile attack I would urge them to bring it forward to the police.”