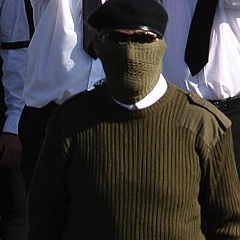 It took place on Saturday afternoon in the Kilwilkie area of Lurgan, north Armagh.

Police said the men were arrested on suspicion of offences under the Public Processions Act and associated offences.

Supt David Moore said, “The arrests were as a result of the subsequent policing operation and concurrent investigation.”

Those arrested had taken part in a colour party at the parade in Lurgan.

The men arrested were from the Republic and were returning to Dublin when they were detained.

Police are liaising with Gardai over the identities and background on the 12 men.