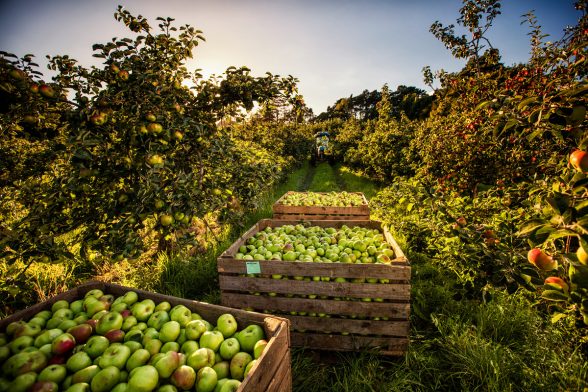 NORTHERN Ireland’s Year of Food and Drink 2016 is an exciting time for food and drink here.

Our talented chefs and restaurants continue to gain accolades such as Michelin stars for OX and Eipic and Bib Gourmands for James Street South Bar and Grill and the Old Schoolhouse Inn.

These awards are possible due to Northern Ireland’s unique landscapes and places which have a direct influence on the quality of the food and drink that is produced here, explained Rachel Quigg, Communications and Destination PR Officer, Tourism NI.

“The strength of our local produce has made an impact on the food and drink experience our visitors can expect in our restaurants, hotels, visitor attractions, cafes, pubs and cookery schools.

“Our fields and orchards, landscapes and seas, allow our talented food and drink artisans to make world-class produce that we can be proud of.”

Tourism NI has taken a tasty look at just some of the excellent produce that each county has to offer.

Potato growing in Comber is intertwined with the history of two influential Ulster-Scots families named Hamilton and Montgomery. Only potatoes planted and grown in the former Hamilton / Montgomery lands around County Down can be marketed as Comber Earlies.

Having been granted the elite EU PGI status in 2012, it’s great to see Comber Earlies now among some of the world’s most distinctive foods, in the same league as Parma ham, Roquefort cheese and champagne. Only potatoes harvested in the designated area during May, June and July each year are eligible for the PGI status. 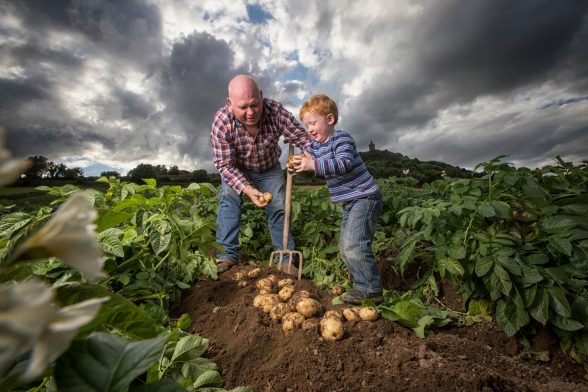 The local fields are protected from winter ravages by the Mourne Mountains and the nurturing embrace of Strangford Lough, so the seed tubers are planted in drills from early January each year – much earlier than in other parts of Northern Ireland.

Armagh, known as the ‘Orchard County’ of Ireland, has a history of apple growing dating back 3000 years. Saint Patrick planted an apple tree at Ceangoba, an ancient settlement east of the city and today more than 4000 acres of Armagh are covered by apple trees.

The modern history of apple growing in the Orchard County of Armagh, begins not in Northern Ireland, but in the village of Southwell in Nottingham. In 1809, Mary Anne Brailsford planted a seed in her garden. Matthew Bramley bought the property years later and the seed and tree took his name.

In 1884, Mr CJ Nicholson of Cranagill House, Loughgall, bought 60 Bramley seedlings from Henry Merryweather, a young nurseryman who spotted the tree’s potential many year’s before, and introduced them to Co. Armagh.

As the largest freshwater lake in the British Isles and the fifth largest in Europe, Lough Neagh is not just steeped in amazing history and folklore, it’s also the home of the largest wild caught eel fishery in Europe. Eel fishing has been a major industry on the lough for centuries – archaeologists have even found evidence of commercial eel fishing dating back to the Bronze Age.  Regarded as the Rolls Royce of the eel, the Lough Neagh Eel’s creamy flesh is a real delicacy with over 400 tonnes of eels fished each year.

So no wonder they were awarded PGI status in 2011, a recognition of the heritage, tradition and authenticity of the best quality eel available in Europe.

Two other uniquely North of Ireland foods are Dulse and Yellow Man.

Dulse is a salty, seaweed snack, originally harvested by fishermen to supplement their income when fishing was slack.  The unique taste is directly influenced by the region from which it comes, the Antrim coast, and it can be found at markets, in cheeses and it can add a very pleasant saline edge to a loaf of soda bread.

Yellow Man, as with Dulse, is associated with ‘The Ould Lammas Fair’ which has taken place annually in Ballycastle, Co Antrim, since the seventeenth century.

Within the town, streets are lined with more than 400 stalls selling a wide variety of goods, from livestock to painted scrolls. But the busiest trade is always at the stalls offering the traditional Lammas treats of Yellow Man, a sticky honeycomb toffee and Dulse.

NESTELD among the yellow fields of Oilseed rape in Binevenagh Area of Outstanding Natural Beauty, you will find Broglasco Farm, home of Broighter Gold Rapeseed Oil.

At the Broighter Gold ÉCONOMUSÉE workshop, owners Leona and Richard work hard all year to produce a premium product and it is now possible for anyone to come and uncover the process involved in the production of the award-winning Broighter Gold Rapeseed Oil.

Visitors will see the oilseed rape transformed into a crystal clear golden liquid and wander through the small exhibition area, explore the historical connection to the Broighter Hoard and discover the characteristics of Broighter Gold Rapeseed Oil.

To celebrate their fifth birthday and to mark the Year of Food and Drink 2016, Broighter have created a special edition oil with flakes of 23k gold. 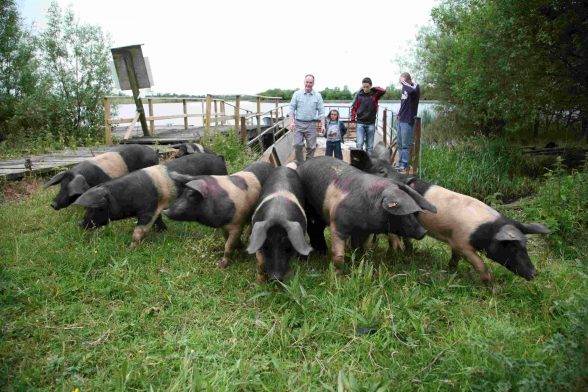 Stunning Fermanagh and its unique bio-diversity make the perfect conditions for producing one of Northern Ireland’s most delicious products – Black Bacon.  Located on a remote island in Lough Erne, you’ll find a herd of rare breed pigs bred especially by Pat O’Doherty that produce the world-famous, award winning Black Bacon.  Take in the sights of the lough on an Erne Water Taxi before hopping off and enjoying some fine cuisine at one of Fermanagh’s award-winning restaurants.

County Tyrone is home to Fivemiletown Creamery, who have been making award-winning dairy produce since 1898 including the first Irish blue cheese, Ballyblue, and the first smoked brie in Europe, Ballyoak.

For more information on Year of Food & Drink 2016 visit www.discovernorthernireland.com/yearoffoodanddrink2016.  You can keep up to date with what’s happening on Facebook, Twitter and Instagram using #EnjoyNI16.