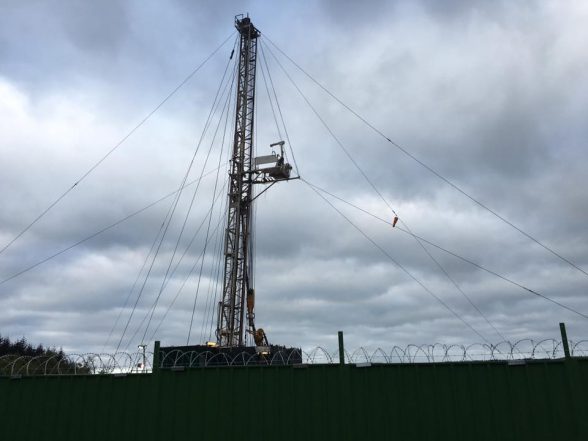 DRILLING has started at Woodburn Forest in Carrickfergus by Infrastrata in search of oil and gas.

In a statement, the Stop The Drill Campaign said today: “On this very sad morning following Infrastrata’s spudding of their first Petroleum well in Northern Ireland at Woodburn Forest near Carrickfergus, Stop The Drill have some very serious questions for NI Water the landlord of the site which was unlawfully leased to the company.

“We also have a number of questions for Mid and East Antrim Council following the disclosure that the Head of Planning, Paul Duffy asked Infrastrata for help in responding to questions from councillors about this project.

NI Water
On 13 May 2016 Stop The Drill wrote to Sara Venning Chief Executive of NI Water raising grave concerns about the claim that the Woodburn well pad is ‘Zero Discharge’. Stop The Drill has also sought the following information from NI Water. Ms Venning was present at an NI Water Board meeting in July 2013.
(http://www.niwater.com/…/boa…/board_minutes_24_july_2013.pdf) where InfraStrata’s request to lease the land at Woodburn was discussed. i.e.
12. Proposal for Oil Exploration at Woodburn Catchment in Carrickfergus The Board considered the proposal in detail. The Board was assured that contamination risk had been dealt with in the pre-conditions for NIW land being accessed for this project. It was agreed that DRD should also be notified of this proposal.

We asked NI Water for this detailed consideration on 30 March 2016 and we believe a response was due on 29 April 2016. While under EIR 2004, the request should have been serviced within 20 working days, in the interim we have been issued with two holding letters, the first deferred release of the information until 11 May 2016 and the second until 30 May 2016. We have now raised a complaint with the Information Commissioners Office.

If NI Water are not prepared to release the detailed information which “assured” the Board and gave the green light to this oil well and potentially multiple wells over the next 50 years, it is hard to contemplate how any other assurances from NI Water would help.

We have advised Ms Venning that NI Water were acting outside their powers in making the Exploration Agreement with InfraStrata.Land at Woodburn Forest was vested under the Belfast Water Act 1899 to protect the water catchment. Read the history here. This breach of the Belfast Water Act 1899 is very serious yet NI Water refuse to comment. We ask NI Water ‘Do you understand how serious this matter is for NI Water given that you are allowing InfraStrata to continue work in the full knowledge of the breach’?

Other issues include the unlawful annexation by InfraStrata of the access lane. Stop The Drill questions the role of NI Water in allowing InfraStrata permission to reinject Petroleum into the site etc. We also continue to question the failure of NI Water to carry out baseline testing for key drilling/cementing chemicals like the toxic Biocide T. According to Ms Venning “NI Water has introduced an extensive water quality monitoring programme in the area.” We are calling fo NI Water to release the details of exactly what NI Water will be monitoring? Will they be testing for the whole spectrum of chemicals in the produced water coming out of the drill site? Does the water released from Dorisland into the public drinking water system include testing for toxic disinfection by-products?

We are seeking a detailed explanation of why NI water have put 3 reservoirs out of service the duration of the exploratory drilling. We will be asking how this stacks up with the NI Water (24 February) Press Statement where they stated “The well site has been designed to ensure that all potential discharges from the site are contained and no discharges, either controlled or uncontrolled, will occur from the site into the catchment. The site has been designed as ‘zero discharge’ which means there will be no discharge from the site to local watercourses and therefore no adverse impact on the catchment. “

To put 50% of the Woodburn reservoirs out of service gives the lie to the zero discharge claim.We will be asking how our water catchment can sustain 50 years of the oil and gas industry and what guarantee they can give us that our drinking water will never be contaminated.

We will be asking why they leased the Woodburn site to Infrastrata for the paltry sum of £10,000 per annum and how they can justify this given that policing costs at Woodburn are already in excess of £140,000.

And there will be more for Ms Venning to answer. Should Infrastrata “remediate” this site and then go away, all the chemicals they have pumped into the ground, and the contaminated drilling muds that they have pumped again into the well will still be there. The potentially interconnecting springs will also still be there. For the next 100 years and more there will be a potential conduit 2km into the earth’s crust. When will NI Water use the reservoirs again? For how many decades (as the cement and steel corrode) will NI Water be testing the water in all the springs to ensure contaminated water does not flow into the reservoirs?

Mid and East Antrim Council
Released under Freedom of Information request we have seen an email from Paul Duffy to InfraStrata in which Mr Duffy asks InfraStrata how to respond to Woodburn Forest project queries.

This on the day the Mid and East Antrim Council say they will release an investigation into the breaches of Permitted Development Rights on sitefollowing a High Court action seeking to secure an interim order to stop the exploratory drilling work at the forest near Carrickfergus.

Given that Infrastrata clearly act in the role of advisor to the Council we will be surprised if the results of the investigation finds any fault with Infrastrata’s work on site at Woodburn Forest. Time for the Ombudsman to investigate the actions of Mid and East Antrim Council in respect of the Infrastrata petroleum well at Woodburn.

The following is the email.

Below are 6 questions raised by a member of Mid and East Antrim Borough Council in relation to the proposed exploratory drilling proposed at Woodburn Forest, Carrickfergus. Please advise if you have any comments you wish to make in respect to any matter raised.

Can these 6 questions be looked into by MEA and responded to?
Thanks

In relation to the Permitted Development Right (PDR), can could advise if there would be a duty to review if fundamental details such as the proposed location in the PDR where found to be inaccurate?

On what criteria does the council accept the land use change from catchment to exploration for fossil fuels?

Some baseline testing of noise and water has been done in 2014. Does the Council agree with the results stating what the water wells in the vicinity of InfraStrata’s well site were tested for and can Council advise what were the baseline levels of noise in the nearest preceptors need to be in the public domain?

Can Council, in conjunction with DETI, advise of the proximity of the proposed drilling to the abandoned and partially collapsed salt mines in the local area?

What is the value of the insurance protection that is being provided to cover the exploratory borehole drilling?

What is the function of the exploratory borehole in relation to the reservoir of oil/gas underneath and will there be more than 1 well drilled?
Thanks