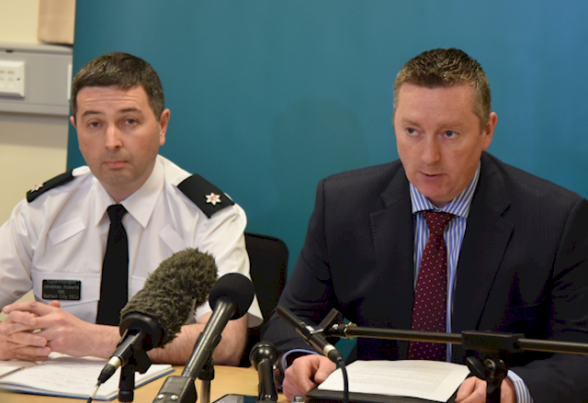 A funeral service has taken place for murdered ‘dial-a-death’ drug dealer Dan Murray who was shot dead in a gun attack in West Belfast a week ago.

Dan Murray was shot as he sat in his car on Lady Street off the Grosvenor Road last Monday night, May 9.

Detectives say the 55-year-old fast food delivery driver was lured to his death by a bogus takeaway order.

Mr Murray was well known to police over his supply in prescription drugs.

He had survived a previous gun attack about a year ago.

During the attack, he was shot in the face at his north Belfast.

Fr Brendan Smyth today told mourners that the grief of Mr Murray’s family has been “played out in the light of public glare”.

He added: “They have been added to the very long list of those who suffer at the hands of those who have no care for justice, those who seek to settle things by the barrel of a gun.

“And they say we live in a more civilised and peaceful time in our city’s, our country’s history. I think not.”

Detectives from the PSNI’s Major Investigation Team (MIT) made two arrests last week, but both men were subsequently released unconditionally.

At press conference last week, MIT Senior Investigating Officer, Detective Chief Inspector Richard Campbell explained: “Mr Murray had been in the area as part of his job as a delivery driver for a take away restaurant and was making a delivery to an address in Lady Street when he was shot and fatally injured.