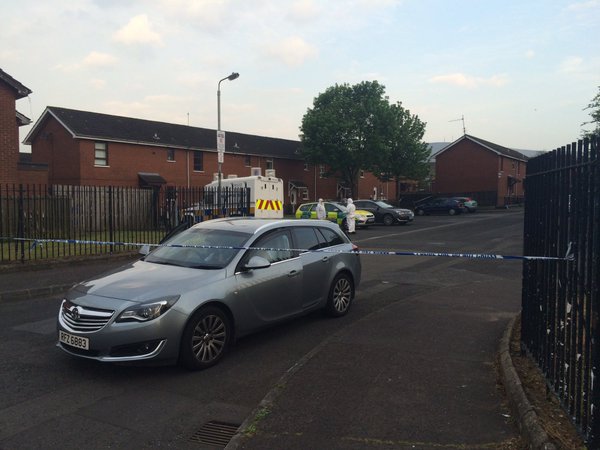 Police and forensic CSI teams examine the murder scene in Lady Street, west Belfast for clues to his killers

DETECTIVES from the PSNI’s Major Investigation Team have arrested a man over the murder a ‘dial-a-death’ drug dealer Dan Murray in west Belfast.

Murray was making a Chinese takeaway delivery when he was shot in the head on Lady Street, near the Grosvenor Road, on Monday when he pulled up in his Ford Focus car.

Police said they believed the 55-year-old had been lured to the area on a bogus call made from the Antrim Road.

The 53-year-old suspect was arrested in west Belfast on Wednesday night.

He is currently being questioned at the serious crime suite at Musgrave PSNI station in Belfast.

A 38-year-old man arrested on Wednesday now been released unconditionally.

At a press conference earlier this week, MIT Senior Investigating Officer, Detective Chief Inspector Richard Campbell explained: “Mr Murray had been in the area as part of his job as a delivery driver for a take away restaurant and was making a delivery to an address in Lady Street when he was shot and fatally injured.