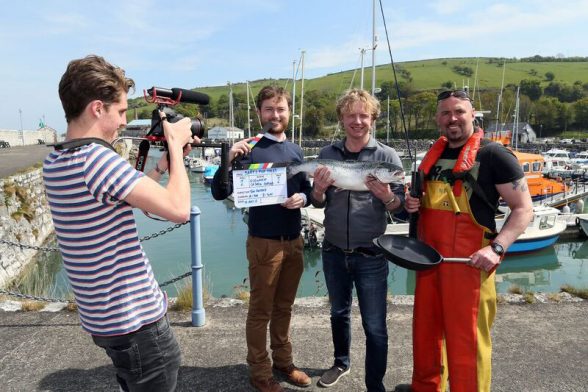 Tourism Ireland invited two video bloggers from the network to come and film in Northern Ireland.

It will show Bart – who’s got his own YouTube channel called ‘Bart’s Fish Tales’ – travelling along the coast to Glenarm, to meet Nigel McClure of Glenarm Organic Salmon.

The video, due to go live at the end of June, will also feature scenic shots of the spectacular Antrim coastline.

The first video was created last weekend in Enniskillen, with chef and broadcaster John Quilter, aka Food Busker.

Jamie Oliver’s Food Tube is one of YouTube’s most successful food channels, featuring Jamie and a number of his friends and up-and-coming cooking talent.

With some 22 million monthly views, it’s a really popular community for food lovers – and a superb platform to showcase Northern Ireland and the wonderful culinary experience on offer here.

Tourism Ireland worked closely with Tourism NI to agree the locations to feature in both films.

David Boyce, Tourism Ireland’s Deputy Head of Great Britain, said: “We’re really excited to work with Jamie Oliver’s Food Tube to promote Northern Ireland’s Year of Food and Drink in GB. Our message here in GB is that Northern Ireland is a superb choice for ‘foodies’ for a holiday or long weekend break. We’re inviting them to come and discover our wonderful food and drink – and also hear the stories of the passionate people who rear, make, cook, distil and serve this superb produce.”

This promotion is just one element of Tourism Ireland’s busy programme of activity throughout 2016 to highlight Northern Ireland’s Year of Food and Drink.

A specially created section on Tourism Ireland’s international website,Ireland.com, is also encouraging prospective visitors everywhere to come and “take a bite out of Northern Ireland”.