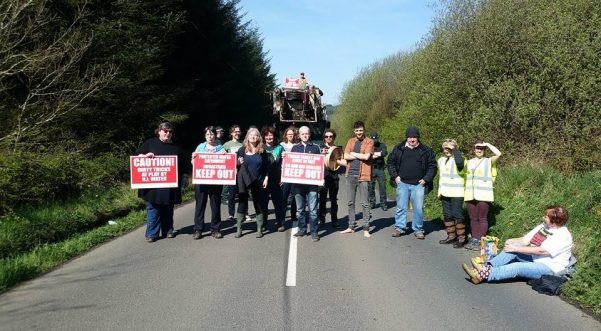 THE actions of the PSNI over the last few weeks in their handling of the StoptheDrill Campaign have united a community of decent people in two ways.

Having spent a number of evenings watching the protesters peaceful opposition to a drill 300 meters from a reservoir and how the police have dealt with them is an eye opener.

The protesters are being bullied by over zealous police officers that without any proof of ownership of the public forest threw people off the site.

The Police assumed the people were the aggressors and they have maintained that stance.

There have been crimes committed at the site.

In one incident, a protestor had a Harrison fence slammed into his mouth.

When I was trying to record an interview with Infrastra’s staff, I was punched in the face by one of their security guards.

In the same incident a local business man was also attacked by the same security guard.

So let’s look at how the police dealt with these crimes.

It took five days for the police to contact me in order to take a statement, they never appeared at the scene to gather the “Best Evidence” as they are trained to do.

The police ombudsman responded today and told me the reason was a lack of resources, what they meant was there were no police officers available.

Despite that response, the police sent 8 officers up to Woodburn the next day after my assault and they were there for 8 hours re arranging traffic cones, could one of those officers not have taken a statement?

Well of course they could…

Saturday saw the expected arrival of the Drill, protestors parked their vehicles away from the site but on the Paisley Road.

So careful were the protestors they actually measured the distance from the junction to ensure compliance with the law.

A driver of a VW Golf parked his vehicle and then checked with a police officer that it was ok to leave his car there, the officer said “Yes she is well parked”

Imagine the fury when the driver returned to collect his car this morning, as he had left his keys at home to comply with drink driving legislation only to find his car towed away by police.

When he spoke to a Police sergeant at the scene and asked why his vehicle had been removed, she said in a very cheeky manner there was an operation put in place.

So he asked why police didn’t contact him, as he was the registered owner?

We know the answer, they didn’t care or could not be bothered, sure they were only protestors.

The genuine people of Carrickfergus and further a field are quite rightly disgusted by the action of local authorities and the Police handling of the issue.

There is genuine disquiet at the heavy handed tactics today and they have set back community relations years.

A BBQ was arranged for the campaigners today, and approx. 50 people turned up.

In days gone by the police would have been offered a sandwich, a hamburger a drink, but not know and quite rightly.

Who would offer a police officer anything now after the way they have behaved, they don’t deserve respect, as respect has to be earned.

Following the protest this morning where the road was closed to everyone including residents the publics right to freedom of assembly under Art 11 of the ECHR was thrown out the window. S

aid  the Gold Commander this afternoon Chief Inspector Stephen McCauley said: “As drilling equipment was being transported to the site at Woodburn Forest this morning, protestors carried out a ‘slow walk’ protest ahead of the convoy during which a male climbed onto the vehicle and scaled the rig.

“This action forced the convoy to stop, obstructing the highway and meant police were required to close the road to ensure the safety of the public, protestors and road users.

“Officers were also concerned for the safety of the male aboard the rig as well as the potential for public order issues to arise.  “Access for residents, those providing home health care provision, Royal Mail and other delivery and business workers is being facilitated. “Police remain at the location to ensure there is no breach of the peace and to facilitate peaceful protest.

While the majority of protest activity to date has been well within the law, the recent actions of some protestors have gone beyond what can be accurately described as ‘peaceful and lawful protest’.  Where offences are being committed or where actions may lead to a breach of the peace, it is incumbent upon police to intervene and address these issues as they occur. “We are working to have the road reopened as soon as possible.”

We asked police for details of the crimes they allege protestors have committed.

There have been no arrests for any disorderly conduct or breeches of the law, but three protestors have been assaulted by security personnel.

Oh, the police were called on Saturday night and 15 officers arrived to investigate a heinous crime as the security staff alleged that a padlock had been cut off the front gate.

Can you imagine the embarrassment of the security personnel and the Sergeant when it turned out, the security guard had forgotten to lock the front gate, and a so-called protestor placed the lock on the gate and locked it himself.

The sergeant had not seen anyone cut off a lock he lied, because his predisposition was “oh the protestor was at fault”.

Sunday saw a similar event when the security staff left a lock off the back gate too.

If you want to find out about the code of ethics for the PSNI, fear not they can’t be found .