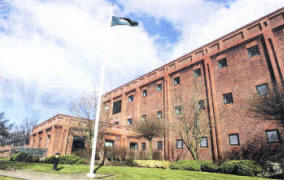 A PSNI sergeant and a former civilian member of staff are to be charged with gross negligence manslaughter in connection with the death of a man in a police cell.

David McGowan from Lisburn was arrested in May 2014 after an incident on the Beersbridge Road in east Belfast.

The 28-year-old died hours later while in custody at Lisburn PSNI station.

The charges follow an investigation by the Police Ombudsman who forwarded a file to the Public Prosecution Service.

In a statement on Tuesday, the Public Prosecution Service (PPS) confirmed that a decision has been taken to prosecute a police officer and a former civilian detention officer in relation to the death of a man in police custody.

“These charges relate to the death of Mr David McGowan while in custody at Lisburn police station on 30 May 2014 and follow an investigation by the Police Ombudsman of Northern Ireland, Dr Michael Maguire,” a PPS spokesperson said.

“After a careful consideration of all the available evidence in the case, it has been decided to prosecute two men, one of whom is a police sergeant and the other was a civilian detention officer, for the offences of gross negligence manslaughter and misconduct in public office.

“Criminal proceedings have now commenced and those involved have a right to a fair trial.

“It is extremely important that there should be no reporting, commentary or sharing of information online which could in any way prejudice these proceedings.”

ACC Mark Hamilton acknowledged how “difficult a time” it had been for the McGowan family following the death of David.

“This is a tragedy for David’s family and we offer them our ongoing sympathy and condolences. I recognise this is another difficult day for them,” he said.

“The PPS have now made a direction in relation to this case and we will continue to cooperate with them over the coming months.

“I can confirm that one police officer has been suspended from duty in respect of these matters.

“A second person who was employed by our managed service provider is no longer working in the PSNI.”

In a statement, the lawyers representing Mr McGowan’s family said they welcomed the decision to prosecute.

They said: “This has been a deeply traumatic two years for David’s family, particularly his mother Elizabeth, but this announcement will go some way in helping them to come to terms with David’s death.

“Although the family welcome the decision, they are still cautious as they recognise it will take some time to reach the final conclusion, however we are all quietly confident justice will prevail.

“We thank the office of the Police Ombudsman for the hard work they have carried out in order to make this decision happen but we cannot underestimate the enormity of work that lies ahead.”