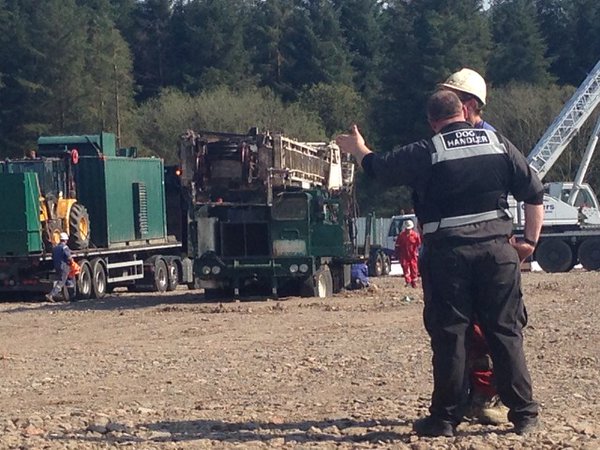 EVEN the best laid plans, ably assisted by ‘North Korean style’ policing from the PSNI, can come unstuck.

And as our picture reveals, a massive oil rig brought into Larne Harbour on Sunday to start drilling in Carrick’s Woodburn Forest has had that sinking feeling today.

One campaigner told Belfast Daily: “It would appear that there has been a poor construction of the site.

“As you can see from the picture, this huge oil rig is starting to sink into the ground under its enormous weight.

“And whatever it brings in to extricate it could also be sunk unless the ground is strengthened.”

Belfast Daily led the way this morning when we revealed how a man had chained himself to the rig and police had closed Paisley Road in Carrick to residents and protestors.

Mark Chapman was later arrested after climbing onto the drill at Woodburn Forest.

He was arrested on suspicion of obstructive sitting but was later released on police bail.

Campaigners claim the well could impact the water supply. NI Water said it was confident there was no threat.

NI Water has leased the site which is within the catchment of a reservoir that supplies water to thousands of homes in Belfast and Carrickfergus.

Prior to his arrest at the site on Monday, Mr Chapman said: “I’m upholding environmental law.

“My understanding is that it is possible to commit a small crime to prevent a larger one.”

His words were greeted with cheers from protesters at the forest site. He also said that he had come equipped and was prepared to chain himself to the drill if necessary.