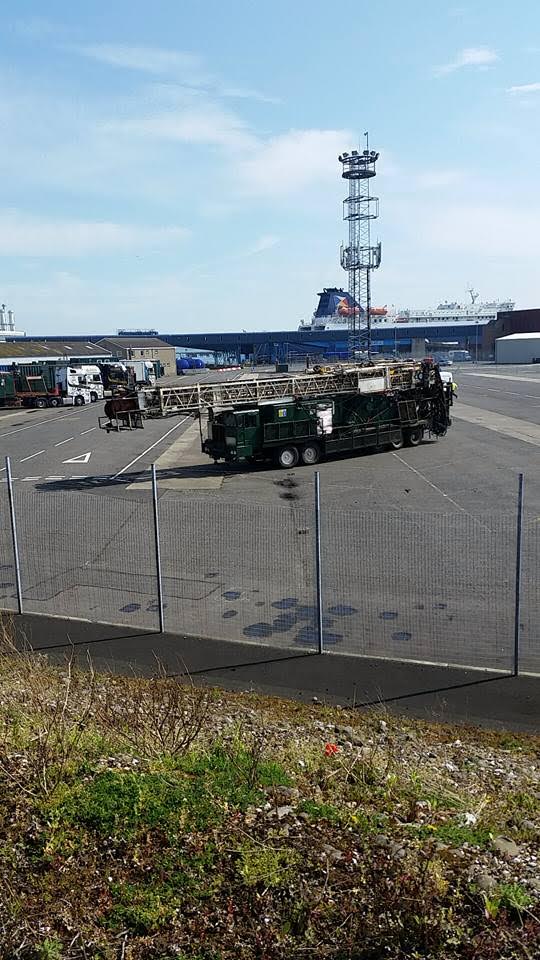 The controversial drill for Woodburn Forest arrives in Larne Harbour

REVEALED: THE controversial drill due to be placed in Woodburn Forest has arrived a few moments ago into Larne harbour.

A number of lorries were parked there overnight in anticipation of its arrival amid a strict veil of secrecy.

Security personnel at Larne harbour had been warned not to talk about where the lorries were parked but StoptheDrill campaigners camped out overnight,  believing their information was correct that the drill would arrive through Larne.

The pressure is now on for Infrastrata after losing a vital high court application earlier this week.

In a statement following Belfast High Court hearing, the Stop The Drill said:.

“The judge ruled in favour of the concerned local resident and granted leave that the Judicial Review can proceed.

“Infrastrata’s barrister stated that the company will go bankrupt if the drill is stopped until Mid and East Antrim Council make a decision on enforcement.

“This is a company that the Department of Enterprise, Trade and Investment (DETI) confirmed just a few days ago as financially sound.

“Anne Donaghy Chief Executive of Mid and East Antrim Council’s affidavit to the court was refused.

“And Greg Jones QC for the applicant was vehement in his condemnation of how the Council have acted.

“He said ‘How long does it take for this authority to figure out that there have been changes made to the access? It beggars belief.

“The conduct of Mid and East Antrim Council falls below the required professional standards’.

“He was heavily critical of RPS (Infrastrata’s consultants) reports citing numerous inconsistencies between the original reports and what is actually happening on the ground.

“An injunctive relief case will be heard on Thursday, 12th May with Infrastrata being forced to disclose their contracts.

“During the hearing it emerged that Mid and East Antrim Council were prepared to give an undertaking to conclude their investigation into the Permitted Development breaches and Waste Management Plan within 10 working days and that this process could be accelerated.

“The Council stated that there will be no environmental impact during this period.

“Given this undertaking Stop the Drill feels it would be reckless if Mid and East Antrim Council were to allow Infrastrata to commence drilling before the results of this process is complete.

“Despite this Infrastrata are continuing with their proposed works, which appear to fly in the face of the courts ruling.

“It is simply staggering that a private citizen has to force the so called responsible authority, Mid and East Antrim Council to make a decision on a project that is so critically time dependent.

“Throughout this process campaigners have sought we have sought to participate in the decisions that will have a significant environmental impact for this country.

“This is a human right which has been ratified by the Aarhus Convention. Not being allowed to participate in this decision is a violation of that right.”