FURY OVER GERRY ADAMS USE OF ‘N’ WORD IN TWEET 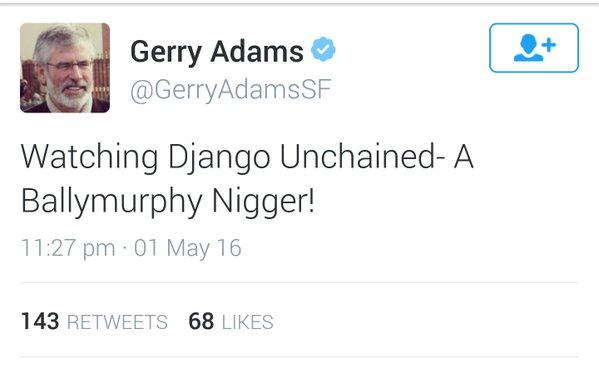 SINN Féin president Gerry Adams has come in for fierce criticism for his use of the racist ‘N’ word in a tweet comparing the plight of slaves in the United States to the treatment of Irish nationalists.

Mr Adams said his use of the ‘N’ word in relation to the film Django Unchained was ironic and not intended to offend.

He added that attempts to suggest that he is racist are “without credibility”.

His initial tweet appeared to compare the experience of the character Django in the film, played by Jamie Foxx, to the treatment of nationalists in Ballymurphy in west Belfast.

Paratroopers shot dead ten people during a series of shootings in 1971.

Django Unchained is set before the American Civil War and focuses on racism, slavery, violence and murder.

Mr Adams said he is opposed to racism.

“The fact is that nationalists in the north, including those from Ballymurphy, were treated in much the same way as African Americans until we stood up for ourselves,” Mr Adams said.

“If anyone is genuinely offended by my use of the ‘N’ word they misunderstand or misrepresent the context in which it was used.

“For this reason I deleted the tweets.”

Tim Brannigan, a former republican prisoner of mixed race parentage, tweeted over the Adams remark: “Comparing nationalists to blacks is clearly wrong and causes genuine offence. Nationalists were not in chains.

“They were not slaves.”

However, the journalist turned author said he didn’t believe Adams was a racist.