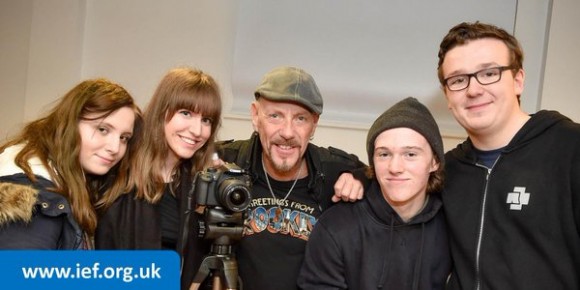 THE Integrated Education Fund is delighted by the generosity of NI punk rock legends Stiff Little Fingers (SLF) and their fans whose continuing support is helping our work to bring more children together in schools in Northern Ireland.

Building on the band’s own track record of giving to the IEF, fans have worked to raise additional cash.

Stiff Little Fingers’ current on-line pledge campaign, inviting audiences to help finance their forthcoming live album and DVD, includes a promise to channel a percentage of the profits to the IEF.

This fundraising initiative has been supplemented in recent weeks by the fans themselves, bringing in additional donations.

Money has been raised through the band’s guest lists on their UK Tour, as well as through the “Roaring Gang” of SLF devotees who organised a special auction prior to the sell-out show at Glasgow Barrowland on St Patrick’s Day, raising almost £4,000 for the cause.

Paul Caskey from the IEF said: “The IEF sends out its thanks to everyone who contributed and especially to Stiff Little Fingers for their continuing support.

“In turn, the Integrated Education Fund will do all we can to support those parents and schools who want children to grow up together and learn side by side irrespective of religion, culture or background”.

Ali McMordie, SLF Bass-player, added: “We are delighted to extend our support to the IEF.

“The fans have responded very generously to a great cause which helps breaks down segregation and promote inclusion in schools.

“My old school, Cliftonville, is now thriving under integrated status and welcoming children from all backgrounds, communities and cultures.

“It’s amazing to see it go from strength to strength and now setting new standards of academic brilliance!”