RUN TOGETHER FOR ACTION CANCER CHARITY 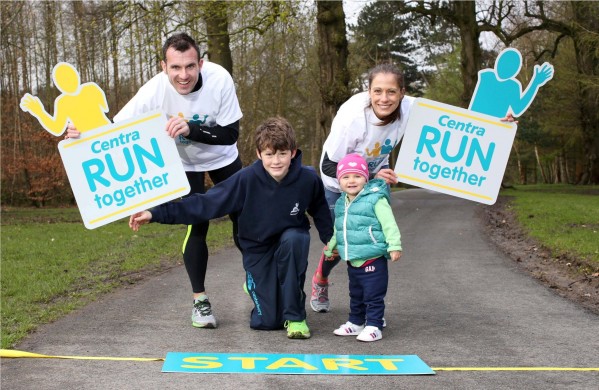 LEADING convenience retailer Centra has developed a new series of fun runs to feed the recent upsurge in ‘social runners’ in Northern Ireland whilst raising funds for a local charity.

Run Together is a set of four 5k races taking place across Belfast, Mid Ulster and Derry between June and October which encourage you to run with your partner, son, daughter, friend or neighbour to raise money for Action Cancer.

Social running is currently the biggest exercise craze in Northern Ireland and with these community events, Centra is aiming to appeal to the complete spectrum of runners from club runners to Park Runners and Couch to 5k runners to newcomers.

“It’s fantastic to see the recent upsurge in participants in the ParkRun and Couch to 5k as well as the emergence of new community based running clubs in Northern Ireland,” said Kelly.

“Centra Run Together will provide a fantastic opportunity for this new audience of runners to capitalise on their training sessions in the ParkRuns and have a bit of fun competing, with friends and family not just cheering them on but actually running with them!” she added.

Centra Marketing Director Michelle Fennell said: “With the launch of Centra Run Together, we are aiming to promote healthy lifestyles and encourage physical and mental wellbeing throughout communities in Northern Ireland.

“The series of runs will provide a novel way for you and your ‘running mate’, whether that’s your brother, cousin, daughter or schoolfriend, to get involved in a local community event, help raise funds for Action Cancer and hopefully have a lot of fun!” she added.

Gillian Thomson, Corporate Fundraising Officer for charity partner Action Cancer said: “Centra Run Together is a great new concept to encourage people to team up and raise funds for those affected by cancer. Cancer touches so many people from all walks of life and all profits and sponsorship money from this event will go towards helping families throughout Northern Ireland by delivery life-saving services right to their doorstep.

“I would encourage anyone whether you’re a seasoned runner or looking to get fit, to run for a reason and help raise vital funds for Action Cancer”, she added.

For further information and registration details for the inaugural Run Together event in Belfast on June 5thvisit www.facebook.com/CentraNI or log onto www.centra.co.uk/runtogether.

Centra is a leading convenience brand in Northern Ireland for retailers who want a convenient range of fresh, local products. Core to the Centra philosophy is building vibrant communities.

Centra stores throughout the province are owned and managed by independent retailers who are committed to supporting towns and villages in which they live and operate.

This is why, every year, we sell in excess of £96 million worth of products from Northern Ireland in our stores.