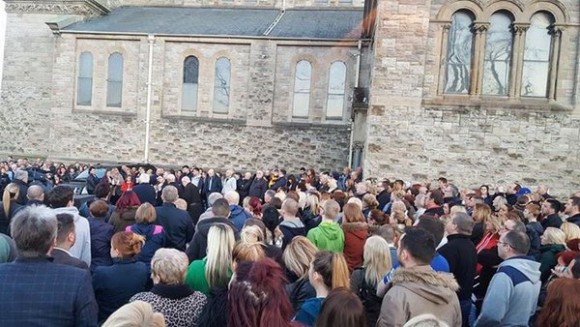 HUNDREDS of people turned this evening for a vigil for Michael McGibbon in north Belfast.

Gathered in the grounds of Holy Cross Church in Ardoyne, they heard his emotional widow Joanne tell them: We are stronger together. They can’t be allowed to beat us.

Michael McGibbon, 33, was shot three times in the legs last Friday night after he went to ‘by appointment’ to meet dissident republican terrorists.

Wife Joanne, a nurse, went to his aid after hearing the shots and valiantly tried to stem the blood but her husband later died in hospital from a severed artery to his leg.

This evening Joanne held a candle as gave a powerful statement to the cowardly thugs who robbed her of her husband and their children of a father.

Standing beside her was her daughter Seana who clutched a picture of dad Michael.

His brutal killing has shocked north Belfast and has left people very angry and frightened that the law of the jungle is still prevalent on their streets 18 years after the signing of the Good Friday Agreement.

Fr Gary Donegan of Holy Cross Church told the assembled crowd that they community would “stand together’ with Joanne and her family.

Added Fr Donegan: “This little family that are present here send out the strongest of messages to those dark forces who took Michael’s life. We are a people of light.

“Guided by Christ our light, I say to you, your actions any of the convictions or integrity of the good people of Ardoyne.

“This young widow showed more courage, conviction, compassion and mercy than you will ever know.”

The PSNI have tonight praised the actions of the organisers of the nightly Twaddell protest.

They called off the protest to allow the vigil to go ahead with any problems.